Recent release “C Case: An Unlikely Journey from Transit Cop to Internal Affairs Bureau Squad Commander” from Page Publishing author Robert L. Bryan is the story of a transit police lieutenant who suddenly finds himself called to perform a job that nobody wants: investigating other officers. 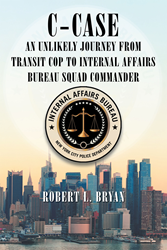 Robert L. Bryan, a law enforcement and security professional who served twenty years with the New York City Transit Police and the New York City Police Department and retired with the rank of captain, has completed his new book “C Case: An Unlikely Journey from Transit Cop to Internal Affairs Bureau Squad Commander”: a potent first-hand account of a new investigator who must deftly walk a tightrope between managing his squad and learning to perform the wide range of investigations conducted by the Internal Affairs Bureau.

“I love cops. In a book whose primary subject is the investigation of police misconduct, I felt it was important to communicate my perspective right up front. Let’s face it, police officers are the force in society that prevents us from sliding into anarchy. I wonder if police detractors have ever taken a break from their criticism of cops to understand how truly difficult the job of a police officer really is. Police officers see people at their worst, and society mandates that these officers, many not much older than twenty years of age, think for people when they are not capable of thinking for themselves. Everyone has the potential to enter into a crisis that temporarily incapacitates their decision-making ability. But that’s all right because along comes a police officer who will think for the person as they would think for themselves twenty-four hours later when they are no longer under the influence of alcohol, drugs, rage, or fear. Police haters should also remember that in this age of the universal terrorist threat, police officers are the first line of defense in the homeland war on terror. As I put the finishing touches on this book, the assassination of brave police officers in Dallas and Baton Rouge is still a fresh atrocity. Considering the antipolice atmosphere that exists within some segments of society, I don’t know why anyone would want to be a police officer in this day and age. Thank God, however, that there are still thousands of the finest young people this country has to offer who answer the call to this noble profession. Are there dishonest and corrupt cops? Of course there are. There are also dis- honest and corrupt lawyers, doctors, teachers, construction workers, bankers, salesmen, and engineers. Do you get the idea? Police officers are a microcosm of society.” -Robert L. Bryan

Readers who wish to experience this uncompromising work can purchase “C Case: An Unlikely Journey from Transit Cop to Internal Affairs Bureau Squad Commander” at bookstores everywhere, or online at the Apple iTunes store, Amazon, Google Play or Barnes and Noble.