Recent release “Operation Ghost Flight” from Page Publishing author Stephen Yoham is a thrilling ride through secret schemes, mysterious accidents, and less than coincidental meetings as H. Hunter Mahoy strives to put together the pieces of a past murder that is somehow connected to a plot to murder the US president. 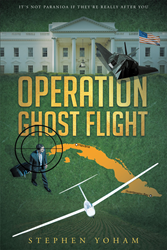 Stephen Yoham, a world traveler, lover of the outdoors, and enthusiastic writer has completed his new book “Operation Ghost Flight”: a gripping and potent action-packed novel bringing the main characters, Hunter and his friend, Morgan, into more schemes and espionage than they ever could have imagined.

Published by New York City-based Page Publishing, Stephen Yoham’s riveting tale begins with the fatal car accident that killed a leading US Senator. Three years later, Hunter accidentally records a conversation between his clients, discussing their involvement in the death of that very US Senator. He takes the recording to the FBI bureau chief in Miami. On the way back to his car, Hunter gets mugged and his office is ransacked. He mails a letter to an old flame, Morgan Lindsey, a Washington Herald reporter, knowing full well she will investigate further.

Later that week, while soaring over the Everglades in a high-performance fiberglass sailplane, Hunter suffers a midair collision with a military stealth fighter. He parachutes into the swamp and stumbles upon an entrance to an underground base where he overhears top US government officials plotting to drop a laser-guided bomb from a stealth fighter on Fidel Castro and US President James Weber during an historical meeting at Guantanamo Bay, Cuba, in just two weeks’ time. Not able or willing to trust anyone, Hunter and Morgan are forced to team up, and the race is on for them to warn President Weber directly before time runs out.

Readers who wish to experience this gripping and thrilling work can purchase “Operation Ghost Flight” at bookstores everywhere, or online at the Apple iTunes store, Amazon, Google Play or Barnes and Noble.