McBroom revisits her worldwide hit, "The Rose," with the country legend 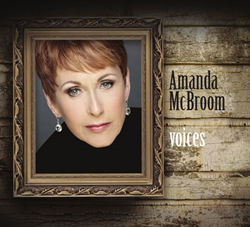 'The Rose' is a message of hope, which seems needed right now.

Gecko Records is announcing the May 5th release of VOICES, the new recording from singer-songwriter-actress, Amanda McBroom. McBroom is celebrated internationally for her song, “The Rose,” which became a worldwide hit for Bette Midler, won a Golden Globe for McBroom and also launched her own concert career. On Voices, McBroom revisits “The Rose” as a duet with country superstar, Vince Gill. This is McBroom’s sixth recording for her label, Gecko. There are 10 original songs included on Voices, some with both music and lyrics by McBroom and several with collaborators, as well as music from composer Julie Gold, Tom Paxton and Livingston/Webster. VOICES was produced by acclaimed Nashville producer, Fred Mollin (Lyle Lovett, Alison Krause, Jimmy Webb, Vince Gill).

The CD is available now through Amazon, LML Music and all major online retailers.

“I thought it was the right time to record a new take on “The Rose,” says McBroom. “It’s a message of hope, which seems badly needed right now. People have always told me the song brings them comfort.”

Since “The Rose” put her on the map as a songwriter, McBroom’s music has been recorded by LeAnn Rimes, Barry Manilow, Judy Collins, Barbara Cook, Anne Murray, Harry Belafonte, Betty Buckley, Stephanie Mills, The Manhattan Transfer, Donny Osmond, West Life, Nana Mouskouri, the Chipmunks, and the Baby Dinosaurs in LAND BEFORE TIME (she wrote all the songs for 16 Universal Cartoon videos with longtime collaborator Michele Brourman). McBroom was also one of the composers on the legendary, ahead-of-its-time series, Cop Rock! Her song “Errol Flynn,” written with the late Gordon Hunt, was named to NPR’s list of Songs We Love in 2015.

Once a beginning actress and a burgeoning folkie whose idols included Judy Collins and Joan Baez, McBroom was cast in the iconic production of Jacques Brel is Alive and Well and Living in Paris, and performed the show in New York, San Francisco, Los Angeles and all over Europe. Later, she made her Broadway debut in Seesaw. Her first two direct to disc recordings for Sheffield Labs (Growing Up In Hollywood Town and West of OZ) made McBroom an audiophile darling. Since then she has recorded Dreaming, Midnight Matinee, A Waiting Heart, Portraits, Chanson and Voices on her own label Gecko, established by McBroom and manager Garry George in 1985. Her other recordings include: Live From Rainbow and Stars (DRG), Heartbeats (Varese Sarabande), and A Woman of Will (LML Music).

McBroom’s concert career caught fire after her performance of “The Rose” on the Golden Globes, the Grammys and The Tonight Show starring Johnny Carson. Since then she has appeared in concert halls and nightclubs around the world including Carnegie Hall in New York, the The John Anson Ford Amphitheatre in Los Angeles, Wolf Trap and The John F. Kennedy Center for the Performing Arts (where she sang with the National Symphony Orchestra conducted by Marvin Hamlisch) in Washington D.C., Angel Place Recital Hall in Sydney, Melbourne Recital Hall in Melbourne, Adelaide where she headlined the Festival of the Arts, Chiang Kai-Shek Memorial Hall in Taiwan and nightclubs including Pizza on the Park and Crazy Coq’s in London, as well as 54 Below in New York City.

To request a CD for review: bafaiella(at)savoypr.com