The White House Website Goes Live in Spanish as LaCasaBlanca.com 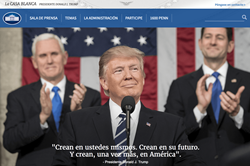 We did not think it was okay that, suddenly overnight, 41 million native Spanish speakers in the US would have the Spanish version of the White House site removed.

To celebrate the first Cinco de Mayo under the Donald J. Trump administration, Transfluent (http://www.transfluent.com), a global leader in translation services, has developed an ideal use case for its near-real-time human-powered translations: the Spanish translations of Donald Trump’s tweets and the White House web site.

In January, the Trump administration removed the Spanish section of the White House website, causing uproar in the Hispanic community (https://www.washingtonpost.com/news/powerpost/wp/2017/01/23/looking-for-a-spanish-version-of-whitehouse-gov-ya-no-existe/).

To help the community, Transfluent created a perfect replica of the WhiteHouse.gov website in Spanish, published at http://www.LaCasaBlanca.com. The original English-language website contains well over one million words and is updated daily. It has been a major undertaking to translate all of the content in fluent Spanish. The work has now been completed, and the entire website, along with all sub-sections, is live.

The WhiteHouse.gov website is updated multiple times a day, and all of the updates are translated with minimal delay. Within about two hours of publication of a new executive order or press release, the same content appears at http://www.LaCasaBlanca.com.

Transfluent first gained prominence for their Spanish adaptations of President Obama’s Twitter feed five years ago when they worked together with the Obama re-election campaign to help deliver the campaign message to the Hispanic population. After President Trump was sworn to the office, Transfluent decided to deliver a Spanish version of the famed @realDonaldTrump Twitter feed as public service.

The Spanish Twitter handle for Donald Trump is @DJT_ES. It publishes all tweets from @realDonaldTrump and @POTUS in Spanish, along with announcements of new articles posted to LaCasaBlanca website.

All translations for the White House website and the Twitter feed are performed by highly skilled professional translators.

Jani Penttinen, Transfluent CEO says: “We did not think it was okay that, suddenly overnight, 41 million native Spanish speakers in the US would have the Spanish version of the White House site removed. Particularly since so many of the things that the Trump White House is saying deeply affects the lives of Spanish speakers,” said Penttinen. “We are not trying to take a position on the Trump administration: we just want to offer the words of ‘the people’s house’ in Spanish, which is, effectively, the 2nd language of the US.”

Transfluent provides translation services for some of the world’s largest corporations, as well as leading start-ups. The company, whose roots are in Helsinki, Finland, has been based in San Francisco since 2011, and now provides translations in 120 languages.