Craig M. Farnham’s New Book “Beyond the Consent of the Governed” is a Riveting Elucidation on the Modern Cultural Politics of the United States of America

Recent release “Beyond the Consent of the Governed” from Page Publishing author Craig M. Farnham is an intellectual account and analysis of political discourse, specifically with regards to United States Presidential administrations since 1981. 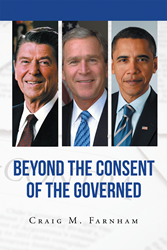 Craig M. Farnham, a dedicated writer and author, has completed his new book “Beyond the Consent of the Governed”: a gripping and potent consideration of recent political history in the United States.

Published by New York City-based Page Publishing, Craig M. Farnham’s thought-provoking work is an interesting dialogue on the current state of the American political culture. Farnham provides an examination and commentary on the past thirty years of politics in the United States, with a focus on Presidential administrations.

An actor who left the glitz and glamour of Hollywood and stepped onto the political stage. The son of a former president who, as president himself, led the nation to war. And the first African-American to be elected president of the United States. American history is filled with saints and sinners as well as leaders who inhabit a space somewhere in-between. It is important to learn from them, and from the successes and failures of this nation, in order to look ahead and map out a role for the United States in the 21st century.

In this engaging new book, the author examines three presidential administrations whose legacies are --at best-- mixed. Ronald Reagan is the man who conservatives love to love, though his actual record as president involves runaway deficit spending and a scandal (Iran-Contra) that nearly cost him the White House. George W. Bush was a president whose personal faith resonated with many Americans; however, his decisions following the attacks on 9/11 would lead the United States into war abroad and ultimately endanger the economy at home. It is too soon to judge (in history's full scope) the presidency of Barack Obama. An early verdict, though, would be less-than-glowing: pointing to a period of political stagnation in Washington and of a president's inability to successfully deliver on the promise of “change.”

Whether one agrees or disagrees with the assessments laid out in the pages of this book, hopefully readers will put aside the name-calling and the venom of recent partisanship. It is hoped that “We the People” can agree in spirit while disagreeing on specific policy, and together begin a more open and honest discussion of the roads already traveled and the decisions Americans face looking forward. This cannot be done, though, unless and until Americans acknowledge the cracks and imperfections in the image Ronald Reagan painted of a “shining city on a hill.”

Readers who wish to experience this potent work can purchase “Beyond the Consent of the Governed” at bookstores everywhere, or online at the Apple iTunes store, Amazon, Google Play or Barnes and Noble.