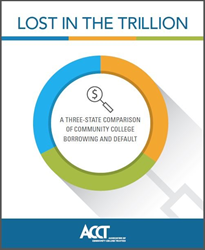 This new research report supports ACCT's previous findings that low-balance borrowers are at the highest risk of student loan default.

The Association of Community College Trustees (ACCT) today issued a new report that examines trends in federal student loan borrowing and default in Kentucky and Louisiana's community college systems. The report compares repayment trends in these states to ACCT's prior research in Iowa, which was published in 2015.

Lost in the Trillion: A Three-State Comparison of Community College Borrowing and Default reveals surprising similarities, with some notable differences, in how community college students use federal debt repayment interventions. The report also expands the analyses performed in prior research by adding an examination of borrowers' incomes. Primary findings include:

The authors of Lost in the Trillion, ACCT policy analysts Colleen Campbell and Ivy Love, analyzed detailed data about borrowers at 21 community colleges throughout Kentucky and Louisiana who entered repayment in 2013. The authors were also able to access income data for the Louisiana cohort, which provided additional context to the economic situations of community college student loan borrowers. The FY2013 cohort default rate in Kentucky was 26.2 percent, compared with 19.9 percent in Louisiana; in the 2015 Iowa study, 18.5 percent of students had defaulted. Although the Iowa cohort entered repayment in 2011, Campbell and Love identified many similarities among the cohorts, including in the amount borrowed, loan statuses, and default rates.

"This new research report supports ACCT's previous findings that low-balance borrowers are at the highest risk of student loan default," said J. Noah Brown, president and CEO of ACCT. "We also see some limited, but interesting, data from students in Louisiana, showing that the students who borrow the least also have the lowest median earnings across all borrowing groups, which could contribute to high default rates. But until we see more comprehensive analyses from the federal government, we'll remain in the dark about why students, and why low-balance borrowers in particular, default."

Federal policy recommendations included in Lost in the Trillion include:

"We were interested in learning more about our student borrowers," said Dr. Monty Sullivan, president of the Louisiana Community and Technical College System. "We have made major changes across our system to ensure that our students are set up to be successful, and we believe that assessing our borrowers' outcomes is a big piece of that puzzle."

Dr. Jay Box, president of the Kentucky Community and Technical College System, agreed: "Students come to our colleges seeking the opportunity to improve their lives, and our system is working hard to meet their needs."

"We hope that policymakers and influencers will take these findings and recommendations into consideration," Brown said. "With total student loan debt exceeding $1.2 trillion nationally, and with over seven million borrowers in default, our country can't afford not to invest in reforms to curtail this dangerous and preventable trend."

Founded in 1972, the Association of Community College Trustees (ACCT) is the nonprofit educational organization of governing boards, representing more than 6,500 elected and appointed trustees of community, technical, and junior colleges in the United States and beyond. ACCT's purpose is to strengthen the capacity of community, technical, and junior colleges and to foster the realization of their missions through effective board leadership at local, state, and national levels. For more information, visit http://www.acct.org. Follow ACCT on Twitter at http://www.twitter.com/CCTrustees.