Author David Page’s New Book “Now Do You Believe in Magic?” is the Story of Two Gay Teenagers in the Sixties who Agree to Switch Bodies with the Help of a Witch’s Spell

Recent release “Now Do You Believe in Magic” from Page Publishing author David Page is a tale of renewal wherein Megan and David, secretly gay teenagers in the generally homophobic climate of sixties and seventies America, enlist a witch’s help to switch bodies and lives to fulfill their dreams of being able to openly love who they wish. A lifetime passes, and Megan now wishes to regain her youth to pursue love once again. 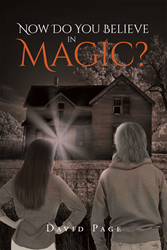 David Page, a Houston-area resident with four grown children, has completed his new book “Now Do You Believe in Magic”: a poignant tale of metamorphosis, acceptance, and renewal.

Published by New York City-based Page Publishing, David Page’s heartfelt tale poses the question of how far one would go for love.

“Now Do You Believe in Magic?” is a story about a couple of teenagers growing up in the late sixties to early seventies. Megan Miller is a sixteen-year-old girl who has a secret: she’s gay. Not only that, she has a bad reputation, the kind most girls would hate to have. She runs into a witch and finds out about a spell that will transfer her soul into another person’s body, but she only has a month to do it. She needs to find a boy willing to do the spell with her. In her search, she finds a boy named David Wilson, who’s also gay. David had graduated the year before and was now nineteen and planning to move to California to start a new life. She talks him into doing the spell with her, and to David’s surprise, it works. Now he, as Megan, must learn how to be a sixteen-year-old girl and back in school.

Megan is now in David’s body, and she, as David, moves to California and starts the new life that he wanted. David, now stuck in Megan’s body, must somehow straighten out the bad reputation had Megan left him with. As Megan, he meets a boy in school and falls in love, and after the two of them graduate, they get married. Decades later as an old woman, she reads a story in the newspaper about witches and is compelled to write to the paper, telling them if they wanted to know about real magic, they needed to come see her. The editor sends a reporter named Jack Dunham to interview her. Her husband had passed away two years prior, and she’s left alone. After meeting Jack, she was quite taken with him. Again, she goes to see the old witch to find out if she can make her young again. The old witch tells her there is a way, but it will be very dangerous. Megan wants to try anyway- she wants to meet Jack as a young woman to see if they would fall in love.

Readers who wish to experience this spellbinding work can purchase “Now Do You Believe in Magic” at bookstores everywhere, or online at the Apple iTunes store, Amazon, Google Play or Barnes and Noble.