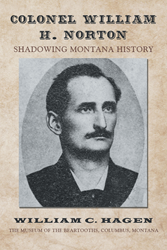 William C. Hagen, a retired lawyer, amateur historian, and proud native of Montana has completed his new book “Colonel William H. Norton: Shadowing Montana History”: a perceptive account of a man well-known in his time for his leadership but largely ignored in recent history.

Author Hagen writes, “There is little to deny that [Colonel Norton] cut a broad swath through the history of Montana throughout the last four decades of the nineteenth century and into the first two decades of the twentieth. Norton was well respected by his peers for his service to country, state, and community. Because of his prominent role in Montana history, which includes stints in both the territorial and state legislature and as the special correspondent of the Helena Daily Herald credited with sending out the first news to reach the national audience of General Custer’s defeat on the Little Bighorn, William Norton was well known by his contemporaries.”

Colonel William H. Norton lived a colorful and adventurous life from the battlefields of the Civil War to the perilous Bozeman Trail to the Montana frontier. Norton’s impact on Montana’s history is derived from his deeds and not from his words. As a seventeen-year-old, Norton survived being left afoot on the banks of the Bighorn River when the wagon train’s mules were run off by marauding Indians. He tried his hands at mining and freighting and finally as a trader and city builder in Montana. Norton’s rise from Illinois farm boy to merchant to legislator and philanthropist is a story of perseverance, courage and intelligence.

Readers who wish to experience this compelling work can purchase“Colonel William H. Norton: Shadowing Montana History” at bookstores everywhere, or online at the Apple iTunes store, Amazon, Google Play or Barnes and Noble.