Recent release “Gray's TV Season 1” from Page Publishing author Robert Gallagher is the adventure tale of Beau Boru’s chance encounter with an alien and the invitation he receives to star in an alien television series. Beau is given the opportunity to experience one adventure after another and the opportunity for everlasting life. 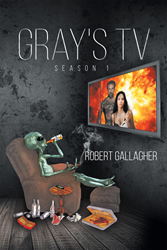 Robert Gallagher, a retired Army Officer, with multiple tours in Vietnam, a former Government Employee, and a jack of all trades, which included working as a teacher, taxi driver, short order cook, waiter, fast food employee, bartender, oil field worker, circus employee, and funeral home worker, has completed his new book “Gray's TV Season 1”: a gripping tale of Beau Boru’s chance encounter with an alien and the invitation he receives to star in an alien television series.

According to Gallagher, “(I) am now retired and living in Alamo, Texas with (my) new love, Kitty-Kitty, a 90 pound Chocolate Lab, since the passing of (my) beloved dog, Cody. (I) enjoy travel and seeing what’s over the next hill, around the bend, or across the seas. (I) am still trying to find that one woman with which to grow old with, but (I) may have to be content to live vicariously through Beau Boru and seek many more seasons with his friend Phil and the people of Melmac. As long as there is an Area 51, there will always be more seasons.”

Published by New York City-based Page Publishing, Robert Gallagher’s adventurous tale centers around the protagonist Beau Boru, and an invitation by an alien to star in a television show on the alien’s home planet, Melmac.

Boru was driving past Area 51, when he meets an alien who looks like Phil Silvers, the Old Sgt. Bilko on TV. He warned Boru he was going to die in just a few minutes when a tire would come off an eighteen wheeler truck and cause him to swerve into the desert, causing him to crash and resulting in the deaths of both him and his dog, Cody.

Phil offers Boru an opportunity to star in a television show, in Phil’s home planet of Melmac, about life on Earth where situations are changed due to Boru’s intervention. Phil assures Boru this television show in no way will change the real events on Earth and no lives would be altered in any way.

While the participants on the television show would live their lives cloaked in the natural feeling of a real life, it was not. They would resort to being recycled in the natural DNA pool when it was their time. Phil offered Boru a life of one adventure after another. The offer was so much more attractive than death in a Nevada desert. Boru accepted and looked forward to living the dream of everlasting life and adventure, with his dog Cody to accompany him.

Readers who wish to experience this gripping work can purchase “Gray's TV Season 1” at bookstores everywhere, or online at the Apple iTunes store, Amazon, Google Play or Barnes and Noble.