Recent release “The Lost Outpost” from Page Publishing author Joshua Quentin Hawk is the tale of Commander Daniel Bowers whose mission is to find a new habitable planet following the overpopulation and environmental degradation of both Earth and Mars. However, in the process he awakens an ancient force and is shot forward in time. 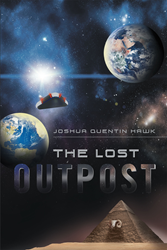 Joshua Quentin Hawk, a former network engineer and environmental science scholar, has completed his new book “The Lost Outpost”: a gripping and potent tale that is set in the year 2260 and centers around a scientist who finds himself in a battle between political and supernatural forces on a mission to save human kind.

According to Hawk, “After many years of medical issues, due to kidney failure and transplant, (I) now (have) the time to write. (I have) wished to be a published author since (I) was young and in high school.”

Published by New York City-based Page Publishing, Joshua Quentin Hawk’s adventurous tale centers around Commander Daniel Bowers, a scientist who is sent to explore a newly found planet for possible colonization, but in the process is shot forward in time due to ancient supernatural forces.

Bowers is put right in the middle of a coup and conspiracy by the Earth President and an ex-Admiral, his former Commander, and both do not care whom they hurt and wish to use the newly acquired alien technology found in the Andromeda Galaxy for their own profit and power. To complete his original mission, Bowers will need to stop his ex-Admiral, the coup, and the ancient force he has awoken, but first he must remember who he is after suffering memory loss during the time traveling. Bowers and his new team, who at first is suspicious of his identity, must work together to stop the evil forces at play.

Readers who wish to experience this gripping work can purchase “The Lost Outpost” at bookstores everywhere, or online at the Apple iTunes store, Amazon, Google Play or Barnes and Noble.