Featured This Week on The Jazz Network Worldwide: Vocalist, Jim Altamore Gives a Sneak Peek at his New Single, “Do Nothing Till You Hear From Me”

Jim Altamore is a vocalist who is known for singing tunes straight out of the Great American Songbook. His new single, “Do Nothing Till You Hear From Me”, is a sneak peek of the style Jim is a natural at. 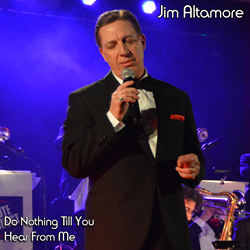 Every artist has their muse. Basie and Sinatra resonated with me from an early age. Their natural approach to making music inspired me to pursue my dream of becoming a singer.

Jim’s father always appreciated the true American music art form of jazz and swing. Jim was led on the right path early on by his father introducing his ears to great singers like Sinatra, Ella Fitzgerald and Tony Bennett, and it never changed!

After meeting some jazz musicians who encouraged him to pursue his dream, the Sinatra sound resonated both literally and figuratively in him and felt that ‘crooner’ come to the vision of his musical heart. He was ready to take his chances and find his own voice that would capture the audience that loved the vocal-styling of Frank Sinatra. After years of learning his craft and pursuing his dream, word got out and Jim began to living his dream.

Jim has performed world-wide, highlighted by a series of concerts in France in tribute to Sinatra, and has worked with artists such as Diana Ross and Spyro Gyra. His voice was featured on Broadway in “A Bronx Tale” in which he sang Sinatra’s version of “Fly Me to the Moon”.

"Every artist has their muse. Basie and Sinatra resonated with me from an early age. Their natural approach to making music inspired me to pursue my dream of becoming a singer. Connecting intimately with the audience while blending tempo and phrasing perfectly is my approach to giving a great performance. I guess that’s why my singing style is often described as “smooth”. ~ Jim Altamore

Always thinking of entertaining new audiences, Altamore is assembling some Count Basie alumni to compliment his vision for a project paying homage to his musical mentor “Count Basie”. The songs are being hand-picked to capture that supreme swing that Basie was known for. Jim lives by the motto: “Too much Basie? There’s no such thing”. Look for this project to be tippin’ its mit, early 2018.

“License to Swing”, Jim’s CD, is the perfect example of the type of musical presentations Altamore offers to live performances, special events and music festivals worldwide. It’s fun for him, music runs through his veins. He can walk into any musical setting, call the song and key and go straight ahead with musicians he’s never rehearsed with, as he sinks into the melodies with a story-telling ease and lands it every time” says Jaijai Jackson of The Jazz Network Worldwide.

Always on the go, Jim is assembling his 2018/19 calendar and wants to create new relationships with non-exclusive worldwide agents for all types of bookings and band configurations. He is looking to carve out a new type of environment of musical platforms from festivals, fundraisers, high-end corporate events, special-themed events, as well as recording and teaching. He believes that you “have to love what you do” and to completely trust yourself. Music education comes second nature to his life’s calling. He stresses the techniques that are learned as a tool to perfect your vocal instrument without forcing your craft by obtaining his musical tidbits through his one-on-one Skype lessons. Having sung with big bands that love his sound, Jim has opened his interest in working with worldwide university jazz ensembles, as a guest artist, for not only a concert but a master class during the day.

Catch his feature on The Jazz Network Worldwide this week at thejazznetworkworldwide.com as well as going to jimaltamore.com to purchase “License to Swing” and to learn more.