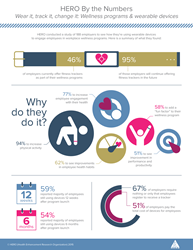 HERO has collected a number of statistics about use of wearables.

We see a lot of promise in the use of wearables as a component of a comprehensive workplace wellness program, but we need to continue our focus on research that uncovers what works and what doesn’t.

Wearable devices, such as activity trackers, have shown promise as tools to increase participation in employee wellness programs. Currently, one in six consumers in the United States uses wearables in the form of either a smart watch or a fitness band, and more than 75 million devices are expected to be in use in the workplace by 2020. It’s safe to say, wearable devices are here to stay. But getting the most out of a device requires more than simply asking employees to use it.

A new report from HERO (the Health Enhancement Research Organization) examines how employers are using wearables in their workplace wellness programs and what outcomes have emerged. The report, a follow-up to a landmark 2014 HERO study on wearables in the workplace, identifies some promising practices for employers who seek guidance on how to effectively incorporate wearables into workplace programs.

Published recently in the “Wearables in Wellness” issue in The Art of Health Promotion, a special publication of The American Journal of Health Promotion, the report identifies the following promising practices for businesses that have added, or are considering adding, wearables to their own well-being efforts:
● Give or subsidize devices for employees rather than requiring them to buy their own;
● Set goals and encourage employees to meet them and earn incentives;
● Involve spouses and domestic partners to increase participation and create a support system outside of the workplace;
● Use a pilot program to identify ways to improve the effort before expanding to the entire workforce; and
● Modify the program from time to time to keep employees engaged.

“We see a lot of promise in the use of wearables as a component of a comprehensive workplace wellness program, but we need to continue our focus on research that uncovers what works and what doesn’t,” said Jessica Grossmeier, Ph.D., vice president of research for HERO. “Early research supports that a device, on its own, will not change health behaviors over the long term. That’s why we’re focused on identifying those leading-edge strategies that employers can use to ensure an effective, safe, and engaging approach for employers and individual participants.”

The process of creating the HERO Wearables in Wellness Case Study Report started with invitations to 37 companies to complete phone interviews, and seven companies agreed to be interviewed. The final report includes three case studies of organizations that together employ more than 60,000 people, and whose incorporation of wearables into their wellness program reflects a comprehensive, results-oriented approach. Participants include BP, Emory University, and Ochsner Health System.

Each employer HERO contacted took a different approach to implementing wearables into its plans, but there were some clear commonalities among the programs that had the most success.

“Through this effort, we found that forward-thinking employers who have been early adopters of well-being best practices are also implementing wearables in creative and effective ways,” said Jack Bastable, national practice leader, employee health and productivity, for CBIZ. “They’re realizing success, in part, because they are supporting their device strategy with a sound communication strategy, making it financially feasible, and encouraging long-term use.”

Highlights from the case studies
BP Million Step Challenge: At BP, which started using wearables in 2013, more than 75 percent of eligible participants enroll in an annual Million Step Challenge, and 79 percent reach their goal. BP has modified the program over the years to add goals beyond one million steps, and smaller goals for less active participants who are unable to achieve the million-step goal. As a result, the program has been consistently popular with participants, with 92 percent saying they are either satisfied or very satisfied.

Emory University: Emory launched its own wearables program in 2014 with a pilot program at five sites. Based on those results, Emory made modifications and offered the program to all Emory University and Emory Healthcare employees the following year. Healthy Emory’s Move More Challenge was designed to be fun for participants and included team-based elements to encourage social support and inspire friendly competition.

To learn more about HERO research, including this study, visit http://www.hero-health.org.

About HERO – Based in Waconia, MN, HERO (the Health Enhancement Research Organization) is a not-for-profit, 501(c)3 corporation that was established in 1996. HERO is dedicated to identifying and sharing best practices that improve the health and well-being of employees, their families and communities. To learn more, visit http://www.hero-health.org. Follow us on Twitter @heroehm or LinkedIn.