Sharon Chase Hoseley tells a story of difficult relationships and difficult times in her new book. 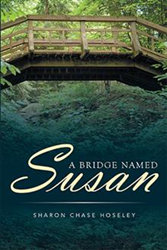 The other two-thirds of her life held no clue as to what she had been through.

Sharon Chase Hoseley’s mother, Susan, spent a subzero winter living in a tent. Her husband was even colder. During a time when character and endurance was tested, Susan was building her life on faith.

In “A Bridge Named Susan,” Hoseley tells her mother’s story, connected by family bridges. Susan left the relationship of a distant mother, only to marry an even more distant man and work partner, during the worst economic downturn in the history of the industrialized world.

“My mother was a great story teller,” Hoseley said. “I was fascinated by the hard times she experienced in the first thirty years of her life. The other two-thirds of her life held no clue as to what she had lived through.”

For the past 17 years, Hoseley has written, directed and produced children’s plays. She has gained recognition in several writing contests and published another book, “Jesus, Lord of My Seasons – Hard Places,” in 2014.

“I want this story to reach the multitudes that want to give up and escape, because life is too hard,” Hoseley said. “Everyone can find their courage and strength, if they have faith.”

For more information about “A Bridge Named Susan,” visit: http://bookstore.xlibris.com/Products/SKU-001130676/A-Bridge-Named-Susan.aspx.

About the author
Sharon Chase Hoseley, a retired Kindergarten teacher, writes and directs children’s plays and creates curriculum for classrooms and camps. Her meditation book, “Jesus, Lord of My Seasons, Hard Places,” was published in November 2014. In 2016, “A Bridge Named Susan” was one of the top three finalists in the Oregon Cascade Writing contest. Sharon lives on the edge of Idaho and enjoys reinventing her life by walking through open doors of opportunity. For more, visit: http://www.abridgenamedsusan.com/.