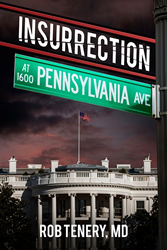 ...the terrorists will shift their focus to a more effective tactic of infiltration to gain control.

With arguably the most contentious presidential campaign and election in United States history now behind us, Dr. Rob Tenery (http://www.robtenerymd.com) pens a political/medical thriller set in today’s socio/political landscape.

In his fifth book, Tenery, an ophthalmologist, presents a world in which global powers leverage their footholds using military might, information technology and access to oil. Tenery develops a plot where America’s longstanding predominant rule is challenged as other countries grow restless and begin making plans that will establish a new world order.

The novel follows an emergency room physician in Texas, who, unexpectedly is brought into the intrigue, along with the White House chief of staff to propel the novel forward as they come together for the terrorizing conclusion in the nation’s capital.

Tenery was compelled to cast the plot in the time period immediately following the Trump administration, and his references of past real-life political figures will further intrigue current events enthusiasts.

“Terrorism is spreading like a wildfire across the European continent,” Tenery says. “However, I feel, with immigration restrictions enacted by the Trump administration, the terrorists will shift their focus to a more effective tactic of infiltration to gain control. With the world’s most powerful military, united with the predominately controlled oil-rich, Muslim countries in the Middle East, what better union to reach their goal of global domination?”

Kirkus Reviews acknowledged Tenery for how he “consistently blends dual medical and political storylines, each with its own worthy protagonist. Tenery fills his pages with plot turns, including unexpectedly corrupt characters, at least one truly shocking death, and a dread-inducing, anonymous individual seemingly spearheading a nefarious plan. A memorable ending implies a possible sequel.”

Tenery’s first four books chronicle stories of his family’s life in medicine, winning over the girl of his dreams who would become his wife of more than 50 years, and the evolution of the health care delivery system. Tenery’s latest endeavor, "Insurrection at 1600 Pennsylvania Avenue," combines his love of medicine with his interest in politics into a page-turning medical thriller.

“Dr. Tenery is a treasure to work with for a publisher,” says Milli Brown, Founder and CEO of Brown Books Publishing Group. “His expertise in the medical profession and his passion for politics come together for an explosive read.”

About Brown Books Publishing Group (BBPG)
Founded in 1994 as an Entrepreneurial Publisher for Entrepreneurial Authors®, Brown Books Publishing Group was established to fill a need in the publishing world by allowing authors to have a voice in the publishing process while retaining the rights to their intellectual property. Applying this innovative Relationship Publishing™ model, Brown Books has cultivated a prestigious stable of authors, from New York Times bestsellers to Pulitzer Prize winners and more.. In 1994, Brown Books ushered in A New Era in Publishing™, and more than two decades later, continues to be a successful innovative leader in the publishing, book promotion, and book public relations industries. For more information, please visit http://www.BrownBooks.com.