When an auditor asks what is being used to calibrate a scale, Klosterfrau Healthcare Group always has a competent answer, making it easier for them to pass audits in the highly regulated pharmaceutical industry. 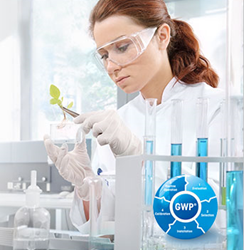 When Brostmeyer learned about Good Weighing Practice™ (GWP®) Verification from METTLER TOLEDO, she immediately recognized that this approach would make her life easier.

For more than 200 years, the German-based company Klosterfrau Healthcare Group has been developing, manufacturing and selling pharmaceutical products. Its portfolio combines traditional remedies with modern drug therapies and encompasses more than 30 brands and nearly 220 over-the-counter products.

At its Berlin site, the company runs state-of-the-art production lines. Scales and balances, whether in quality control or production, are an integral part of the process. Every piece of weighing equipment in use must be regularly calibrated and qualified to ensure regulatory compliance.

The challenge for Claudia Brostmeyer, Head of Quality Control at the Berlin site, is to ensure that all workplaces with their variety of processes and responsibilities calibrate and qualify weighing equipment according to stringent Good Manufacturing Practice and Good Laboratory Practice standards.

Running a compliant weighing station is more complex than it may seem. In addition to making sure that a scale or balance is suitable for the application, sound documentation must prove that suitability to auditors. Operators also must be trained according to valid standard operating procedures to ensure periodic equipment testing, calibration, and qualification is done accurately.

When Brostmeyer learned about Good Weighing Practice™ (GWP®) Verification from METTLER TOLEDO, she immediately recognized that this approach would make her life easier. “GWP is a well thought-out and accepted concept that provides a scientific basis for our weighing equipment verification needs,” she said.

After METTLER TOLEDO conducted a GWP Verification assessment at Klosterfrau’s Berlin site, Brostmeyer received a risk-based assessment and testing recommendations for each scale and balance.

“What I like about the verification document is that it clearly states whether the equipment is suitable for the given process. It also provides recommendations on which tests should be conducted at which intervals with which test weights,” said Brostmeyer. “That makes it easy for me to instruct operators and maintenance personnel on appropriate testing procedures.”

Shortly after METTLER TOLEDO verified the weighing equipment, a production audit put the new process to the test, leaving no questions unanswered.

Learn more about GWP and GWP Verification and how it can establish weighing rationale and help an organization pass its next audit.