If Ryan Brahms is known as a piano man and an electrifying singer and talented multi-instrumentalist dedicated to classic song construction, well, he’s still all those things. But as “Love Dealer” demonstrates, he’s got an ear for immediate, irresistible pop, too. 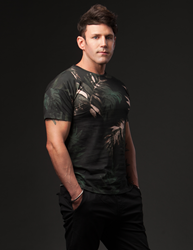 Check out "Love Dealer," the new single by Ryan Brahms

“Just one taste”, sings Ryan Brahms on his newest single, “and this could change your life.” He’s the “Love Dealer”, promising the object of affection an experience so compelling that she’s likely to be transformed by it – and she’s going to need more and more. But Ryan Brahms is also talking about the addictive new music he’s been making, and promising his dedicated audience that he’s about to take them higher than they’ve ever been.

Yes, if Ryan Brahms is known as a piano man and an electrifying singer and talented multi-instrumentalist dedicated to classic song construction, well, he’s still all those things. But as “Love Dealer” demonstrates, he’s got an ear for immediate, irresistible pop, too. Brahms always sounds smart, confident, and accomplished; now, add “sexy” to that list of attributes (he’s been dressing the part lately, too, appearing around his native New York City in shades and sharply-tailored suits.) Should there be any doubt that Brahms has everything it takes to be a superstar as well as a respected musician, “Love Dealer” ought to put that to rest.

Produced by Brahms and David Wade, “Love Dealer” is a colorful, danceable amalgam of growling low-end synthesizer, scratchy, propulsive funk guitar, high-end ear candy, and rock-solid beats. Yet its Ryan Brahms’s magnetic performance that sells the song: he’s alluring and coy in the right places, gritty and elastic when he needs to be, and never less than exciting. When he tells his love object – and by extension, his listener – “you’ve been waiting for this day for so long”, it really does feel like Ryan Brahms has at last arrived at where he was always headed.

Which is not to say that he’s abandoned any of the qualities of the music that has made him an underground attraction in New York. This is an artist who thrives when confronted by adversity, and who has written persuasively about his own resourcefulness, and his refusal to be defeated by life’s obstacles. The balladeer who stole hearts with the emotionally forthright, piano-driven “Be Mine” – not to mention an empathetic cover of Billy Joel’s “New York State Of Mind” – hasn’t gone anywhere. He’s just figured out a new way to approach the musical seduction he’s always specialized in. The work he began with Rishi Rich on the slinky, club-friendly remix to “For This” has come to fruition on “Love Dealer” – and now, the sky is the limit. Turn it on; get moving.

Check out "Love Dealer," the new single by Ryan Brahms