LendEDU released its Race, Gender & Paying for College Report analyzing the impact of student debt on today’s graduates including which groups are most impacted. LendEDU surveyed over 1,400 college graduates currently working to repay student debt. 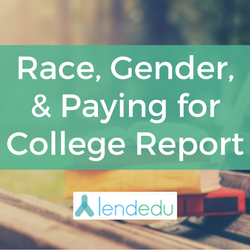 In 2017, the majority of college graduates are leaving campus with student debt. According to a new report titled Race, Gender & Paying for College by LendEDU, the impact of student loan debt goes beyond personal finances and varies depending on race and gender.

Over the last decade, outstanding student debt has grown by 162% to an estimated $1.44 trillion. LendEDU created this report to study the financial, emotional, and personal externalities of student debt.

“Student debt has had a huge impact on my own life,” said Nate Matherson, CEO/Co-Founder of LendEDU, “Student debt is a complex issue that influences our financial lives, but also our emotional states and our ability to grow our personal lives. We hope that our survey and report captivates current students, parents, educators, and our elected officials.”

About LendEDU
Since 2014 LendEDU has delivered free financial aid resources to high school and college students. LendEDU is a marketplace for student loans and student loan refinancing. LendEDU helps graduates find the lowest student loan quotes with one application. The company is partnered with all of the leading student loan companies including SoFi, Citizens Bank, Sallie Mae, College Ave, Earnest, LendKey, Darien Rowayton Bank, among others.

LendEDU was founded by Nate Matherson and Matt Lenhard in August of 2014. LendEDU is a graduate of Y Combinator’s W16 class, the Iowa Startup Accelerator, and the Horn Program at the University of Delaware.