The Best Infrastructure as a Service Software According to G2 Crowd Spring 2017 Rankings, Based on User Reviews 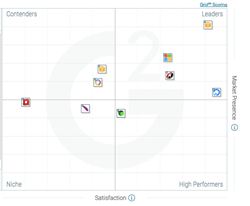 •Amazon Dominates Marketplace — This may be common knowledge, but Amazon is a big player in the Infrastructure as a Service market. The vendor holds two of the three highest Market Presence scores in the category. While S3 was second to only DigitalOcean in Satisfaction score, Amazon VPC was fourth lowest.

•Support is Spotty — The most frequently cited issues with IaaS products was obtaining support. Large vendors performed poorly for the most part, while smaller products succeeded. Ease of Setup and Quality of Support were the two lowest average Satisfaction scores in the report at 83% and 82%, respectively.

•Providers are Reliable — Users frequently discussed their trust in their provider’s infrastructure. These tools did not often falter or provide inconsistent functionality, according to reviewers. It appears end users are putting a lot in the hands of providers and they have not disappointed.

About the Infrastructure as a Service Software Grid report:

•The report is based on more than 393 reviews written by business professionals.

•Of the 56 products listed in G2 Crowd’s Infrastructure as a Service category, the ranked products each received ten or more reviews to qualify for inclusion on the Grid.