Website Created by eSchoolView Receives Praise at the State Level 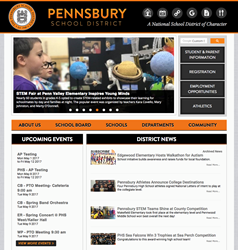 The CMS is user-friendly and in a large school district like ours, this means a lot of employees are updating pages on a regular basis with ease.

Pennsbury School District is one of three districts in the state of Pennsylvania to earn an Award of Excellence for its district website.

The Pennsylvania chapter of the National School Public Relations Association recently recognized the district in its annual statewide competition for the site’s function and form. Pennsburysd.org was launched in 2016 and created by eSchoolView, which also hosts the site.

“The CMS is user-friendly and in a large school district like ours, this means a lot of employees are updating pages on a regular basis with ease,” she said.

Intuitive navigation, an emphasis on crisp graphics and the prominent role of a photo gallery are key elements to the newer layout. Less focus on text also increases interaction between the site and end-user.

Pennsbury’s Director of Technology Kevin Dorsey said the district selected eSchoolView over other providers because of the company’s cost, usability and commitment to customer support.

"eSchoolView was a great team player throughout the entire migration process and after going live,” he said.

The mobile performance of the site also improved dramatically with eSchoolView’s responsive design. The site is optimized to display on a variety of platforms and can be accessed through eSchoolView’s KnowItAll app which is available for free in the IOS and Android app stores.

Websites created by eSchoolView are often recognized at the state level and have received significant national praise. The NSPRA parent chapter recognized Grayson County Schools in Kentucky and Shaker Heights City Schools (Ohio) about nine months ago for their websites and the Ohio chapter just recognized an educational service center’s site. Likewise, eSchoolView was given an Education Standard of Excellence award for Shaker’s site in September by the Web Marketing Association.

eSchoolView was created in 2008. Its revenue growth lands the company on the Inc. Magazine’s 5000 list of fastest growing privately held companies in the U.S. for the third consecutive year.