Author J. Thomas Callahan’s New Book “Blitz Police” is the Gripping Story of a Young American Soldier’s Valor While Serving in Germany During and After World War II.

Recent release “Blitz Police” from Page Publishing author J. Thomas Callahan is the story of Jacob “Jake” Wells, born in 1923 in rural Tennessee and drafted into service in the US Army two weeks after his nineteenth birthday. Following the war and after distinguished service in the Battle of the Bulge and its aftermath, Jacob is recruited to serve in the elite US Constabulary to maintain order in the chaos of postwar Germany, sparking a half-century-long mystery and a son’s investigation into his father’s secret past. 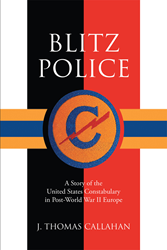 J. Thomas Callahan, who began a career in the criminal justice system spanning three and a half decades following service in the US Army, has completed his new book “Blitz Police”: a potent World War II thriller about an American soldier who stumbles upon evidence of an insidious criminal enterprise and must face widespread corruption and great risk to his own life.

While hunting in the mountains outside of American-occupied Salzburg, Austria shortly after the end of World War II, decorated US Army Sergeant Jacob “Jake” Wells discovers a crate buried in a cave. When he opens the crate, he unwittingly opens a Pandora’s box that will have him fighting for his life—and have his son questioning his integrity nearly seventy years later. Within hours of opening the crate, he and his best friend find themselves propelled into a world of danger greater and more personal than they faced while battling the German Army. In the rubble that had once been the Greater German Reich, the two Constabulary troopers are confronted with corrupt Army officials, black marketers, arms dealers, fugitive war criminals, and desperate Army investigators, and they must fight for their very lives just to be able to return home.

Published by New York City-based Page Publishing, J. Thomas Callahan’s fast-paced and gripping novel brings the devastation of the War and the chaos of its aftermath to life.

Readers who wish to experience this suspenseful work can purchase“Blitz Police” at bookstores everywhere, or online at the Apple iTunes store, Amazon, Google Play or Barnes and Noble.