Author B. C. Alain’s New Book “The Dragon’s Curse” is a Dark, Post-apocalyptic Fantasy in Which the Only Remaining Civilization Lies Beneath the Surface of the Earth.

Recent release “The Dragon’s Curse” from Page Publishing author B. C. Alain is the ominous tale of the reduction of human civilization to a dark, dangerous life in cities carved out of giant sinkholes, as the surface of the earth is scorched and barren of life. Tarn Winchaser, who guards the underground city from the malevolent creatures lurking in the world below, must not only face but vanquish an ancient evil that has escaped from its eternal prison. 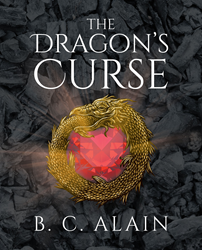 B. C. Alain, a Georgia resident who spent his childhood on the other side of the world immersed in fantastic tales of heroes facing terrible odds, has completed his new book “The Dragon’s Curse”: a gripping fantasy of post-apocalyptic heroes, elves, dragons, and druids battling an ancient and timeless evil.

The world ended three thousand years ago. The surface is empty and dead, and mankind only survived by carving their new cities and towns in great sinkholes called Krads. In one of these Krads, a man named Tarn guards the town against the threats of the world beneath them. On one mission gone wrong, an ancient evil is released from its prison. Now Tarn and his companions, an elven druid named Malriel and Shar, the dark elf thief, must face a being so powerful and so malicious that the dragons themselves call him a curse.

Published by New York City-based Page Publishing, B. C. Alain’s gripping and potent story of the eternal battle between good and evil on an unrecognizable Earth of the distant future.

Readers who wish to experience this darkly engrossing work can purchase“The Dragon’s Curse” at bookstores everywhere, or online at the Apple iTunes store, Amazon, Google Play or Barnes and Noble.