On May 6, Denver Zoo welcomed Umi (OOH-mee), a female Malayan tapir and the third birth of her species in the history of the zoo. 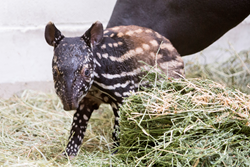 Umi, a female Malayan tapir born at Denver Zoo on May 6, takes some of her first steps under the watchful eye of her mother, Rinny.

Denver Zoo is happy to announce the birth of Umi (OOH-mee), an endangered Malayan tapir (TAY-purr). The female calf, whose name means “life” in Indonesian, was born to mother Rinny, and father Benny, early the morning of May 6. She is only the third birth of her species at the Zoo. Umi will remain behind the scenes at the Zoo’s Toyota Elephant Passage habitat, while being cared for by her mother, until she is able to swim and they are both comfortable enough to venture outdoors.

This is the third birth for both parents and Rinny has already proven to be a very patient mother, calmly making sure Umi is nursing successfully. Rinny was born at Seattle’s Woodland Park Zoo in 2007 and came to Denver Zoo from there in 2010. Benny was born at the City of Belfast Zoo in Ireland in 2006 and arrived at Denver Zoo from there in 2007. The two were paired under recommendation of the Association of Zoos and Aquariums (AZA) Species Survival Plan (SSP) which ensures healthy populations and genetic diversity among zoo animals. Fortunately, the couple has proved to be an excellent match.

Though they are most closely related to horses and rhinos, tapirs are similar in build to pigs, but significantly larger. Malayan tapirs have a large, barrel shaped body ideal for crashing through dense forest vegetation. Their noses and upper lips are extended to form a long, prehensile snout similar to a stubby version of an elephant’s trunk. Malayan tapirs are the largest of the four tapir species. As adults, they can stand more than 3-feet-tall and can stretch from between 6 to 8-feet-long. On average they weigh between 700 and 900 pounds. They are also excellent swimmers and spend much of their time in water. They can even use their flexible noses as snorkels!

As adults, Malayan tapirs have a distinctive color pattern that some people say resembles an Oreo cookie, black in the front and back, separated by a white or gray midsection. This provides excellent camouflage that breaks up the tapir’s outline in the shadows of the forest. By contrast, young tapirs have color patterns that more resemble brown watermelons, with spots and stripes, which help them blend into the dappled sunlight and leaf shadows of the forest to protect them from predators.

Malayan tapirs are the only tapir native to Asia. Once found throughout Southeast Asia, they now inhabit only the rainforests of the Indochinese peninsula and Sumatra. With a wild population of less than 2,000 individuals, they are classified as endangered by the International Union for Conservation of Nature (IUCN), due to habitat loss and hunting.