Billy Sims BBQ wil open its first restaurant located in the Fountains Shopping Center at 5300 Fountains Dr Suite 108 and restaurant founder and legendary football player Billy Sims will be in Cedar Rapids on May 19 and 20 to meet guests and sign autographs. 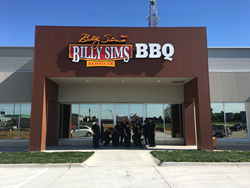 “Our first Iowa restaurant that opened in Burlington early last year has been such a success that we knew we wanted to open the next Iowa location as quickly as possible,” said Jeff Jackson, co-founder and CEO of Billy Sims BBQ.

Billy Sims BBQ’s extensive menu includes nine meats including favorites such as ribs, beef brisket, pulled pork, chicken, turkey and even Bologna! All meats are smoked daily over Pecan wood in the restaurants. Completing the lineup are traditional sides with a twist, such as baked potato salad and mustard based potato salad, freshly smoked corn, coleslaw, baked beans with pulled pork, green beans with bacon and entrée size salads with fresh vegetables. All Billy Sims BBQ restaurants showcase the smoker in the front of the restaurant with a strategically placed cutting station which shows guests that meats are pulled right off the smoker and freshly sliced prior to serving.

“Our first Iowa restaurant that opened in Burlington early last year has been such a success that we knew we wanted to open the next Iowa location as quickly as possible,” said Jeff Jackson, co-founder and CEO of Billy Sims BBQ. “Our Iowa franchisees have done a great job introducing Eastern Iowa to our barbecue and we look forward to even more Iowans enjoying our food.”

The Cedar Rapids, Iowa restaurant is owned and operated by franchisees Jeremy Music and Brandon Mosley. The two opened the first Iowa Billy Sims BBQ restaurant in Burlington last May and plan to open additional locations in Muscatine and Dubuque, Iowa in the future.

Founded by University of Oklahoma running back and 1978 Heisman Trophy winner Billy Sims and co-founder and CEO Jeff Jackson, the popular Billy Sims BBQ brand has experienced phenomenal growth in recent years as BBQ enthusiasts embrace its special proprietary recipes and processes for preparing and smoking beef, pork, and more. The restaurant chain first began operation in 2004, franchising in 2009, and diners now enjoy over 50 locations across six states.

Named a Franchisee Satisfaction Award Winner for 2016 and 2015 by Franchise Business Review and a Future 50 fastest-growing small chain restaurant in 2015 by Restaurant Business, Billy Sims BBQ is consistently ranked highly by franchisees for its leadership, training and operations support, financial performance and general satisfaction. For more information on Billy Sims BBQ, visit http://www.billysimsbbq.com.