The debilitating neurologic disease which affects 1 in 1000 people is hearing the footsteps of researchers. Evidence for a possible environmental trigger has surfaced and may have implications for other common diseases. 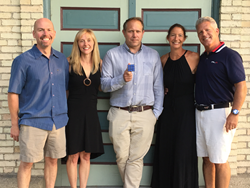 Dr. Warmoth and his Agent Z team, including Christopher Ostrowski, Crystal Brown PT, Christy VanderHeide RN, and Eric Brown MD believe they have the switch to turn off M.S.

"We need to return to prevention as the focus of medical research. The cost of the current model in terms of human suffering and pharmaceuticals is unsustainable." Michael Warmoth MD

The key to unlocking the cause of Multiple Sclerosis may lie in the dirt at our feet.

Multiple Sclerosis (MS) is a neurological disorder that can rob people of their ability to see, speak, and walk. It is caused by the immune system's attack of one's own brain cells. MS arises from a genetic tendency towards the disease combined with an unidentified environmental trigger. The genetics of MS are the target of aggressive research, but finding triggers have proven to be more elusive.

Partnering with The James and Shirley Balk Foundation in Grand Rapids MI., Dr. Michael Warmoth and his Agent Z Team were able to unmask a possible triggering bacteria; Mycobacterium avium paratuberculosis or MAP. MAP was on the short list of suspects as elevated antibodies to MAP have been found in some MS patients. There are also anecdotal reports of MS appearing amongst island populations right after the bacteria was accidentally introduced. The MAP bacterium can be found in a variety of locations including the soil, water, and amongst livestock.

In the study, a vaccine against MAP was given to MS-prone mice in hopes that it would protect them from the disease. A 40% improvement in disability level was noted with just one vaccination. This number is expected to rise once booster doses are evaluated. The results are to be published in the upcoming book Dirt: An Incomplete Education by Michael Warmoth MD. It examines the relationship between the rise in autoimmune diseases and our increasingly sanitized world. The ultimate goal of this project was to make the research widely available to patients so that they can help direct future research; research aimed at prevention and possible cures as opposed to temporary symptom relief and ongoing medication costs.