The winner of Carnegie Council's third annual Student Research Conference was Amanda Lupion, for her presentation "The Grey War of Our Time: Information Warfare and the Kremlin's Weaponization of Digital Russian-Language News." 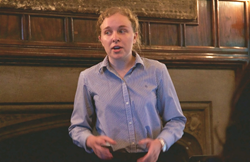 There is a pressing need for research on the Kremlin's foreign language digital news outlets, such as Sputnik and RT, as well as on Moscow's use of social media and the infamous 'trolls.'

Carnegie Council for Ethics in International Affairs is pleased to announce that Miranda Lupion's presentation was selected as the winner of the Council's third annual Student Research Conference. The title is "The Grey War of Our Time: Information Warfare and the Kremlin’s Weaponization of Digital Russian-Language News."

"There is a pressing need for research on the Kremlin's foreign language digital news outlets, such as Sputnik and RT, as well as on Moscow's use of social media and the infamous 'trolls,'" wrote Lupion in a follow-up interview after the conference.

She spent the summer of 2016 interning at the U.S. Embassy in Moscow, where she focused on digital media. Her research, based on quantitative and qualitative content analysis, compared state-backed news outlets' coverage of the 2008 Russian-Georgian War to their reporting on the 2014 Crimean annexation.

Based on her findings, Lupion argues that "from 2008 to 2014, Moscow improved its ability to capitalize on the benefits of digital news—namely the unlimited publication space of digital media—to increase the thematic reach and persuasiveness of its coverage."

In 2017, she graduated Phi Beta Kappa from the University of Pennsylvania with a BA in international relations and Russian language. Read the full interview with Lupion here: https://www.carnegiecouncil.org/publications/articles_papers_reports/the-grey-war-of-our-time-information-warfare-and-the-kremlin-s-weaponization-of-digital-russian-language-news

"Since we launched this annual conference three years ago, the interest from students from all over in participating has grown and remains strong," said Carnegie Council Senior Fellow Devin Stewart, who organized the conference. "Five East Coast universities were represented this year out of a pool of applications from 13 institutions, and the quality of each presentation was astonishing. One of the judges noted that the level of sophistication surpassed some academic conferences he's attended.

"Student participants also told us they enjoyed making new contacts and presenting their research among peers during the event. We heard about scholarly findings on a variety of topics, including humanitarian intervention, youth exclusion, information warfare, cyber security, refugee resettlement, and the national memory of slavery."

The Student Research Conference, which took place on May 3, 2017, consisted of a networking session followed by 10-minute presentations on topics related to ethics and international affairs. The students came from universities across the New York metro area.

"Presenting my senior capstone at the Carnegie Council is easily one of the highlights of my undergraduate career," said one of the student presenters, Joy Nuga of Hunter College. "After spending a year and half culminating my research and many sleepless nights, I felt a great sense of accomplishment presenting to an audience and being part of a cohort of incredibly captivating colleagues. I will forever be thankful for the intellectual platform the Carnegie Council's student research conference has provided me."

The other presentations are listed below:

Margaret Sanford, Fordham University, "Inclusion and Formation at Sites of Conscience: Working Towards a National Memory of Slavery in the United States."