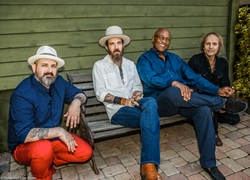 The Kenneth Brian Band's powerful music combines a lot of dirty guitar, bass and drums with relatable lyrics that reflect what life is really about. - Grammy-nominated musician Robert Randolph

The Kenneth Brian Band is gearing up for the release of their fourth studio album, With Lions. This LP, heavily influenced by musicians they have played with over the last few years, delivers a mega-dose of modern Southern Rock and Americana with slide blues guitar. Tom Petty and the Heartbreakers’ Steve Ferrone and Scott Thurston both lent their talents to the album and Ferrone is the band’s regular drummer, when not on tour with Tom Petty. The album was produced, mixed and engineered by David Bianco (Bob Dylan, Lucinda Williams and Tom Petty) and will be released on Robo Records March 19, 2017, with an album drop event on May 18th, at the opening night of the Malibu Guitar Festival, in Malibu, CA. The first single, “You’re Not Mine”, is being serviced to Rock and Americana radio.

The Kenneth Brian Band’s timeless song-craft, peppered with Kenneth’s gritty vocals and guitar prowess have helped earn them a loyal fanbase and the respect of fellow musicians. Along with Steve Ferrone (Drums, Percussion), the quartet’s dynamic live performances and musical flair also attracted the attention and support of legendary musicians like Lucinda Williams and Billy Gibbons. In the past few years, the band spent two years opening for multi-Grammy winner Lucinda before playing several dates in 2016 with ZZ Top.

The forthcoming release, With Lions, includes 11 songs all penned by Kenneth and pays tribute to their musically rich and culturally significant Southern heritage. Lyrically, the album is a cathartic collection of rock‘n’roll short stories, which Grammy-nominated musician Robert Randolph said is filled with “...relatable lyrics that reflect what life is really about.” The single “You’re Not Mine” is an edgy anthem with heavy-hitting guitar solos and their signature harmonies. “Beautiful Storm” a tribute to a former bandmate who passed away, is an emotionally evocative track that showcases Kenneth’s spell-binding competency with a slide.

World-renowned drummer Steve Ferrone doesn’t just sit behind the kit, he worked with the guys to hone their sound and helped recruit the right players. Drummer Chris Cano, handpicked by Ferrone, plays with KBB when he’s on the road with the Heartbreakers. Popular session bass guitarist and Disresputable Few member, Paul Ill, joined the band at Steve’s urging and perfectly rounded out the Kenneth Brian Band sound. “Those two were the perfect combination for what we do,” said Kenneth Brian. “Their influence has helped elevate our playing and just being around Steve is a master class on how to be a successful artist and a decent human being,” he continued. In true KBB form, the sound of the new album honors their distinctive blend of Southern Rock that is both progressive and rooted in tradition.

The Kenneth Brian Band will play the Malibu Guitar Festival (May 18-21) Summerfest in Milwaukee, Wisconsin on July 6th.

About The Kenneth Brian Band:
Together since 2009, The Kenneth Brian Band includes co-founders Kenneth Brian (Lead Vocals, Lead Guitar) and Travis Stephens (Harmony Vocals, Rhythm Guitar, Piano), with Steve Ferrone (Drums, Percussion) and Paul Ill (Bass) rounding out the quartet on ‘With Lions’. The Kenneth Brian Band released ‘Falling Down Slowly’ (2009), ‘Welcome To Alabama’ (2011) and ‘Blackbird’ (2015). Beginning in 2013, the band spent two years as the opener for multi-Grammy winner Lucinda Williams and joined ZZ Top for several dates in 2016.