Fandom and Fitness: Disney Fans Gearing Up for Upcoming Marathons at Walt Disney World and Disneyland

Disney fans are proving that anyone can run a marathon, and can have fun while doing it! [via The Kingdom Insider] 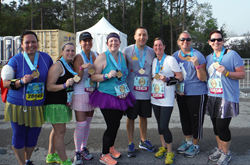 "My love for all things Disney is what originally made me want to participate in this. The fact that anyone, even non-runners, can participate is what encouraged me to finally sign up,” says runner Shelley Walsh

For most people, planning a trip to Walt Disney World includes scheduling FastPasses for attractions, making restaurant reservations and relaxing by the pool.

Enter the world of Disney marathons. Of course, these events aren’t like any other race you may have entered. These are Disney marathons, and they are colorful affairs featuring themes such as Star Wars, Pixar and yes, of course, Disney Princesses. Participants range from avid runners to beginners, and colorful costumes are encouraged.

"My love for all things Disney is what originally made me want to participate in this. The fact that anyone, even non-runners, can participate is what encouraged me to finally sign up,” says runner Shelley Walsh, who has just completed the Disney Princess Half Marathon in Walt Disney World. “The fun themes, the cast member support and the attention to detail separates them from other races.”

If you’re worried about being out of shape, or looking silly in front of a group of seasoned athletes, don’t be. In fact, Disney provides would-be participants with access to training programs from seasoned runner Jeff Galloway on the runDisney web site.

Since the inaugural race in 1994, Disney marathons have grown from a little over 5,000 participants to over 55,000. Events are held in Walt Disney World, Disneyland Resort, Disneyland Paris and even on Disney Cruise Lines.

Some authorized Disney travel agencies, such as Mickey Vacations by Academy Travel, are offering runDisney vacation package that bundle race registration with a resort stay and tickets for Walt Disney World or Disneyland.

“This is a family friendly event,” says Walsh. “Even if a member of your family decides they don't want to run, they can be there to support you.”

For information on how to register for a Disney marathon, contact Mickey Vacations by Academy Travel at 609-978-0740 or by e-mail at anthony.academytravel(at)gmail.com.