Recent release “Lost Boys of the River Camp” from Page Publishing author Jeff Turner is a painstakingly researched work of fiction based on a very real yet little-known youth military training facility called Camp Dewey, considered the preeminent junior training station of its kind and at one time boasted a cadet population of nearly a thousand. This is the story of Henry Cameron, a teenager struggling to find himself in a world torn apart by chaos who enrolls in the camp and embarks on an eventful summer journey of self-discovery. 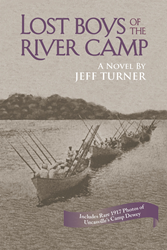 Jeff Turner, author of the award winning “The Way Back” and the critically acclaimed “Hero of Willow Creek,” has crafted an unforgettable portrait of this historic river camp through the eyes of Henry Cameron, a fifteen-year-old struggling to find a place for himself in a world torn apart by war in 1917.

Freckle-faced fifteen and sixteen-year-old uniformed sentries no longer stand guard at the summer camp's main entrance, .30 caliber rifles slung over their shoulders. The roar of artillery drills, once rattling the window panes of nearby cottages and the frayed nerves of summer vacationers, is silent. The bugle calls piercing the stillness of dawn and dusk on the river are no more.

Over a century ago, the civilian-backed Junior Naval Reserve established its first summer station in Uncasville, Connecticut. Dubbed Camp Dewey after George Dewey, Admiral of the United States Navy and hero of Manila Bay in the Spanish-American War, the river station sought to prepare our nation's youth for service in the navy or merchant marine. Schoolboys as young as ten were taught the lore and lure of the sea along with a heavy dose of military training: rifle practice, artillery drills, saber tactics, marches and bivouacs, and battle formations. Hundreds upon hundreds of schoolboys flocked to the river camp each summer with a sense of urgency to serve their country as soon as possible.

Turner skillfully blends fact with fiction and creates a stirring coming of age story, one that captures how a youngster learns to become a man through the strict, unyielding blanket of military rule. Readers can’t help but tag along as Henry’s life is shaped by those he meets during the summer months: a war-weary but wise cavalry lieutenant, a puzzling uncle, a summer sweetheart, and an untamed bully set upon tyrannizing the entire camp.

Published by Page Publishing, the novel contains dozens of rare and never before seen 1917 photos of Uncasville's Camp Dewey on the Thames river, making it a one-of-a-kind collector's item.

Readers who wish to experience this enthralling work can purchase“Lost Boys of the River Camp” at bookstores everywhere, or online at the Apple iTunes store, Amazon, Google Play or Barnes and Noble.