Philadelphia Injury Lawyer, Joel Kofsky, speaks about how truck accidents can be some of the most dangerous. We take a look at how the possibility of enforcing the use of speed limiters on commercial vehicles may curb the number of serious truck and bus accidents. 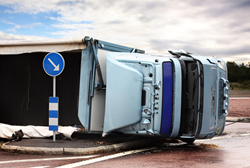 The NHTSA is proposing that this technology is imposed on commercial vehicles without driver control to limit their speeds to 60-68 miles per hour.

Recent debate surrounding the idea of speed limiters has many commercial trucking companies up in arms. The National Highway Travel Safety Administration feels that vehicles over 26,000 pounds should be equipped with speed limiter technology.

In addition to creating safer roads, speed limiter technology will also save over $1 billion dollars in fuel costs each year.

The NHTSA is proposing that this technology is imposed on commercial vehicles without driver control to limit their speeds to 60-68 miles per hour.

NHTSA argument comes on the heels of data released by the Insurance Institute for Highways Safety that claims there were 3,852 fatalities in the US directly related to commercial vehicle accidents. Proponents for the NHTSA base their suggested speed on information gathered by a study conducted by Virginia Tech scientist that claim that many commercial vehicle accidents could have prevented if the vehicle was traveling at a slower speed.

On the other hand, the American Trucking Association, a principal lobbyist who opposes the idea of speed limiter technology, argues that if commercial vehicles should have their speed regulated so should passenger cars.

What the American Trucking Association fails to see is that a passenger traveling in a car at 50 miles per hour that is involved in an accident with a tractor trailer is 20 times more likely to suffer fatal injuries. And tractor trailer speed is the leading reason that these types of accidents occur.

Joel Kofsky, a Philadelphia auto accident attorney, understands the serious injuries that victims of tractor trailer accidents face. He explains, "I've seen too many people's lives shattered because of accidents involving commercial vehicles. And, it's not just the accident and the recovery time that upsets victims' lives, it's the long-term damage and day to day living after the crash that makes things difficult for the victims and their families."

Having been involved in an accident with a commercial vehicle, it is in everyone's best interest to find an attorney to help. A large commercial company will have their own team of attorneys to protect its drivers. No individual is equipped to go up against a large corporate law firm on their own. Hiring representation by someone who understands the laws in depth is the only course of action that should be considered in this situation.