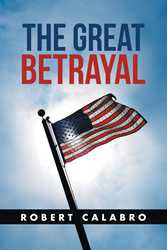 A Brooklyn-based author and monetary policy expert has released a comprehensive diagnosis of the U.S.’s fiscal shortcomings, in which he calls for a return to the gold standard and rejects the Federal Reserve. Intertwining historical context with public finance savvy, Robert Calabro seeks to educate the American public on the ever-crucial topic of fiscal policy in his new book, “The Great Betrayal.”

In the book, Calabro homes in on the caustic nature of inflation, calling it a form of legalized theft, through his constructive and well-researched criticism of the Federal Reserve. He also chronicles the more than four decades in which the gold standard was utilized internationally and delves into major financial events, such as the Great Depression and the 2008 recession.

“I come from a middle-class home, and I want my readers to know that I am one of them,” Calabro said. “Millions of our fellow citizens are suffering from currency devaluation, which is subtracting from our purchasing power. I am tired of seeing people suffer, and I am tired of losing.”

“… this study is accessible, sober and comprehensive,” a Kirkus reviewer wrote about the book. “A useful, if partial, sketch of an increasingly serious and topical fiscal issue.”

“The Great Betrayal” focuses on the foundation of all countries’ economies – currency. Through the power of education, Calabro hopes to deliver the antidote to the U.S.’s monetary policy ills and arm his readers with information so that they may form an educated opinion on the financial needs of the nation.

About the author
Robert Calabro holds a bachelor’s degree in business from Adelphi University and spent his career in both retailing and insurance. Now retired, Calabro spent two years conducting research for and writing “The Great Betrayal.” He currently resides in Brooklyn, N.Y. To learn more, please visit http://www.robertcalabro.com.