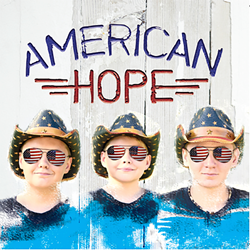 Shortly after the release of their first-ever music video “I’ll Be There”, hot new country music group American Hope is back just one month later with the music video for “My Song”, the eighth track on their self-titled debut album. Like their first video, “My Song” was directed and produced by Alison Owen of Brownhouse Entertainment. The video is now available on the band’s YouTube channel and website, and the song and the band’s full-length studio album is featured on iTunes, Amazon, Spotify, and Reverb Nation.

Upbeat with musical dimension spanning country, rock, and even a hint of “Talking Blues”, or hip-hop, “My Song” is a tale of youth and ambition. Lyrics like “Fenders, Gibsons, electric guitars turned up way too loud” and “beatin’ the cans and breaking the strings” illustrate the most exhilarating aspects of creating music. "My Song" is a perfect reflection of who American Hope is as a band and as individuals - a little country, a little rock and a whole lot of fun!

According to the band, the song is a crowd favorite during live performances. Listeners young and old dance along to the music; it’s energizing for every generation. The oldest brother, 15-year-old Jameson, seen jamming on the electric guitar in the video, wrote the lyrics and music for “My Song" with 13-year-old Jadyn and 12-year-old Kenyon keeping him on his toes with a super charged bass guitar and rocked up drums.

The band has performed in numerous shows throughout Georgia and Alabama and recently placed among the top acts during the Tin Roof Acoustic Showdown in Atlanta. To see American Hope live, keep an eye on the band’s website and Facebook page, or visit their ReverbNation site. For information about booking, see the band’s contact info below. Future scheduled performances include:

Jameson, Jadyn, and Kenyon Hope make up fast-rising country music group American Hope from Atlanta, GA. Over the last eight years, these three brothers have been living out their dreams all across the southeast as talented songwriters and musicians.

Drawing from their personal idols like Keith Urban, Alabama, Garth Brooks, Florida Georgia Line, and Toby Keith, their music reflects these influences, while adding in their own unique harmonies and style. The boys have been wowing audiences big and small since they were 4, 5, and 6 years old. Their music has grown along with them. Along the way, Jameson (15) has become an accomplished lead guitarist, while Jadyn (13) has perfected the bass guitar, and Kenyon (12) has conquered the drums! They have also become very successful songwriters-writing much of their own music.

There is nothing these boys can't do musically! Their first live show was for 2500 people, and they have continued to wow spectators in musical showdowns and festivals throughout Georgia and Alabama with their vibrant, emerging talent. The band’s first self-titled album debuted in the fall of 2016. You can find their latest performances on their website, iTunes, Spotify, and Amazon, or look for them live at one of their upcoming shows.