President Neil A. Salonen to Leave the University of Bridgeport Next Year 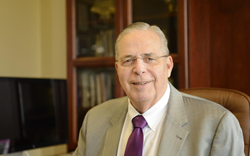 “It has been my great privilege and joy to serve the University of Bridgeport and to work with the Board of Trustees, whose steadfast confidence in UB enabled us to reach significant milestones on behalf of our students and faculty.” -President Salonen

Neil A. Salonen said Wednesday that he will step down as president of the University of Bridgeport (UB) on June 30, 2018.

Board of Trustee Co-Chairman Frank N. Zullo, Esq. named Trustee Robert Bercham as chairman of the University’s Presidential Search Committee. It is expected to name a firm to launch a national search as quickly as possible.

President Salonen, 72, joined the UB Board of Trustees in 1992, becoming chairman in 1995. In 2000, he was unanimously appointed the school’s ninth president, succeeding Dr. Richard L. Rubenstein, who served as president from 1995-2000.

“It has been my great privilege and joy to serve the University of Bridgeport and to work with the Board of Trustees, whose steadfast confidence in UB enabled us to reach significant milestones on behalf of our students and faculty,” President Salonen said. “UB has much to be proud of, and as it looks to celebrate its Centennial Anniversary in 2027, much to look forward to.”

Appointed in the midst of an economic crisis that roiled much of New England and its institutions during the 1990s, President Salonen recalled “rolling up shirt sleeves” and working with trustees, faculty, and other supporters to shore up deficits and steer the University in a new direction.

Under his stewardship, UB more than tripled its revenue, balanced its budget, and established a substantial endowment. Enrollment has climbed to a current 30-year high of nearly 5,700 students.

The campus has visibly and dramatically evolved, too; in the past decade, UB has invested more than $90 million to reopen and enhance shuttered buildings and cut ribbons to gleaming new facilities, including the Ernest C. Trefz School of Business, a nursing school, and University Hall, UB’s newest residence hall.

President Salonen also pushed the campus to evolve its curriculum with multidisciplinary programs that reflect changes in the global marketplace. Its robust online curricula, geared to meet the needs of working and professional students, have been consistently named among the best by U.S. News & World Report. Students include a record number of Fulbright Scholars as well as recipients of prestigious grants and prizes from the U.S. State Department, NASA, and the National Institutes of Health. Athletics also rebounded. In 2007, UB opened Knights Field, one of the premier athletics facilities in the region. It also increased scholarships and academic support for student-athletes, a critical factor to recruiting championship teams whose rosters included honors students and record-setters alike.

“We are all proud of the great accomplishments at UB during Neil’s tenure—more than doubling enrollments, transforming serious budgetary deficits into healthy surpluses, and beginning the true physical renovation and transformation of campus facilities,” said Co-Chairman Zullo, the former mayor of Norwalk. “It is difficult to even think of the University without Neil at its helm, with [his wife] Rebecca at his side. We all know that their whole-hearted investment in the campus community has been a big factor in our success.”

About University of Bridgeport
The University of Bridgeport offers career-oriented undergraduate, graduate, and professional degrees, and award-winning academic programs in a culturally diverse learning environment that prepares graduates for leadership in an increasingly interconnected world. There are 400 full- and part-time faculty members, including Fulbright Scholars, National Science Foundation Fellows, Ford Fellows, National Endowment for the Humanities Fellows, American Council for Learned Societies Scholars, and Phi Beta Kappa Scholars. The University is independent and non-sectarian. For more information, please visit http://www.bridgeport.edu.