LUMAS Celebrates Diversity with “Art Is Borderless” in New York

The LUMAS galleries take a stand for unity and against marginalization; Frida Kahlo portraits by Colombian artist Efren Isaza will be exhibited in the New York galleries starting May 14 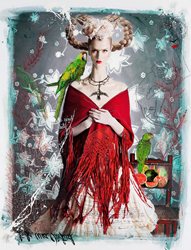 In times of discrimination and xenophobia, it is even more important to make a clear statement in support of togetherness and diversity. With nearly 3,000 works by over 250 artists of greatly varied nationalities, the LUMAS portfolio speaks for itself. Additionally, however, LUMAS is launching an “Art Is Borderless” exhibition with Frida Kahlo-inspired portraits by Colombian artist Efren Isaza in its flagship New York gallery on May 14, 2017. Building on the idea that art knows no borders, LUMAS is taking a stand for freedom and diversity.

As its mission “The Liberation of Art” would suggest, LUMAS stands for openness, tolerance, and cultural diversity. Starting on May 14, 2017, the gallery in SoHo will exhibit four artworks by Colombian artist Efren Isaza, which were strongly influenced by the famous portraits of Mexican artist Frida Kahlo, whose work and creative output were closely tied to the Mexican Revolution. The fashion photographer’s works are loaded with allusions and draw upon an entire arsenal of styles, distorting them until they merge into new compositions.

In one piece, Frida has a stern look, black eye shadow and ornate red braids. In another, she appears bleaker in a long black dress and is surrounded by crows. The enchanting aura of personality emanating from each piece is unmistakable. In her own time as well as today, Frida Kahlo stood as a symbol of emancipation and feminism. Efren Isaza’s photo art transmits both of these sentiments in an impressive way.

About LUMAS
In over 40 galleries around the world, LUMAS offers museum-quality art editions. More than 3,000 works by 250 established artists and many promising newcomers deliver a comprehensive look into the contemporary art and design scenes. The works are available as hand-signed originals in limited editions of 75-150.

Editor's Note:
We have more in-depth information about LUMAS, our exhibitions, artists, and their works, and are happy to provide images for press use. Please do not hesitate to contact us for information and digital files.