National Escargot Day® 2017 pays tribute to the Helix Pomatia, the world’s most sought after escargots, with specialty dishes and chef’s tasting menus. 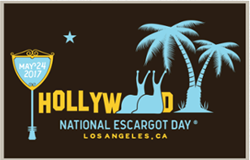 The sustainably conducted month-long search for the true Wild Burgundy Snail, across vast tracts of European wilderness, culminates in a feast recognizing National Escargot Day® on May 24, 2017. A tribute to the world's most versatile protein, National Escargot Day menus celebrate the most sought after escargots in the world, and showcase the Helix Pomatia in all its glory. Los Angeles, CA, is this year's host city, and diners will experience multi-course tasting menus and à la carte options of the “Kobe beef of snails” beginning May 18.

The finest of the 116 edible varieties of helix snail and the only variety that can be truly called "Burgundy Snail", the Helix Pomatia is also nutritionally unbeatable, 100% organic and 100% natural. Always wild, never farmed.