New Jersey Triplets to Graduate Together at Seton Hall

The Bertoldi triplets will graduate from Seton Hall University as part of the Class of 2017 -- the largest undergraduate class in the modern history of the School. 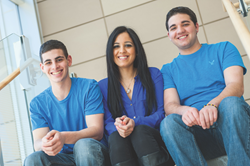 The Bertoldi triplets, Leo, Adrianna and Anthony graduate from Seton Hall as part of the Class of 2017.

I wanted to go to school out of state. But when I visited the Seton Hall campus, there was just something about it that made me feel at home more than any other university.

Leo, Anthony and Adrianna Bertoldi will graduate from Seton Hall University— together.

On May 15th at the PNC Bank Arts Center in Holmdel, New Jersey, Seton Hall University will graduate 1465 candidates with bachelor’s degrees and 1116 with master’s and doctorate degrees.

Founded in 1856, the undergraduate class of 2017 at 1465 is the largest in the modern history of Seton Hall and the commencement will mark the University surpassing 100,000 living alumni.

Among those historic numbers are the Bertoldi triplets, Leo, Anthony and Adrianna from Roseland, New Jersey. The trio will share in that history and some of their own, as they represent the only known triplets to graduate together at Seton Hall and the first ever generation in their family to graduate from college.

Interestingly enough, the triplets’ decision to attend Seton Hall was made somewhat independently.

Adrianna, a nursing major, said, “I actually didn't know my brothers applied to Seton Hall until I got my acceptance letter in the mail. They asked if their letters came and then told me they also applied, but later than I did. It just so happened Seton Hall had great programs for all of our majors, so it was an easy choice to make.”

She added, “To be honest, I wanted to go to school out of state. But when I visited the Seton Hall campus, there was just something about it that made me feel at home more than any other university I visited. I also knew I could excel here as a nursing student which was a large factor in deciding on where to attend.”

For Anthony Bertoldi, a Business Administration major with a dual concentration in Sport Management and Marketing, academic structure and opportunity played a large role in his decision to attend. He said, “I liked how Seton Hall had their Sport Management program in the business school. Also, the proximity to New York City and the opportunity for internships in the area was unprecedented.”

Leo, the oldest of the trio by a few minutes, is a History major with a minor in Political Science, and when asked what drew him to the University, said: “Seton Hall gave me the most money in scholarships. The campus is also small which I love and is beautiful, especially in the spring.”

The graduation processional will commence at 11 a.m. The speaker for the 160th Baccalaureate Commencement Exercises will be the eminent global investment expert Matthew W. Wright ’89. Mr. Wright is the Founder and President of Disciplina Group LLC, which includes Disciplina Advisors, a risk consultancy firm, and Disciplina Capital Management, an investment advisory firm.