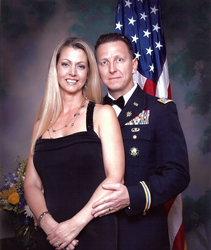 We believe owning a travel franchise is one way military spouses can earn extra income, while having the flexibility of working from home.

According to the 2016 Department of Defense Survey of Active Duty Spouses, there is approximately a 23 percent unemployment rate among active duty spouses, and on average they spend five months looking for a new job.* Recognizing that military spouses who are in the job market crave flexibility to create their own hours and need a virtual office as a result of frequent military Permanent Change of Station (PCS) moves, home-based travel agency franchise Dream Vacations A CruiseOne Company partnered with Military Spouse magazine to host a contest for military spouses who want to enter the travel industry. This Military Spouse Appreciation Day, Fredericksburg, Va. resident and Army wife Stacy Evans has been awarded a free Dream Vacations franchise.

“Being a military spouse is one of the hardest jobs there is. As a result of having spouses who serve in the military and spend extended periods of time away from home as well as require frequent career moves, military spouses are extremely resilient, well-traveled and have to be organized,” said Tim Courtney, CFE, vice president of franchise development and ambassador of veteran affairs. “These traits are the glue which keeps families together and also makes a successful franchise owner. We believe owning a travel franchise is one way military spouses can earn extra income, while having the flexibility of working from home.”

Evans has an entrepreneurial background and in 2002 launched an internet company providing updated BIOS (Basic Input Output System) chips for desktop computers and sold it in 2009. That job afforded her the time to be a stay-at-home mom and in 2014 she decided she wanted to go back to work. In 2015 she graduated from the 61st Basic Police Academy and started working with the Animal Protection Unit shortly after. Due to the long hours and commute resulting in many hours away from home, she decided to find a home-based business opportunity that gives her the flexibility to be there for her kids.

“When my friend shared the link to the Dream Vacations Franchise contest on Facebook, I thought, that would be a perfect fit for me,” said Evans. “I truly believe everyone should have a hobby or activity just for them that brings them happiness. I’d want a business that would be portable if we were to move again. A business doing something that I enjoy.”

Candidates participated in a phone interview and wrote a brief essay describing why owning a home-based travel franchise would be a valuable opportunity for their family. Twenty finalists were identified, with one final winner. The grand prize is valued at $12,700 and includes a complimentary Dream Vacations franchise and weeklong franchise training at the Dream Vacations’ state-of-the-art world headquarters in Fort Lauderdale, Fla. In addition to the waived $9,800 initial start-up fee and monthly service fees, Evans will be reimbursed up to $500 for travel and receive complimentary accommodations during the weeklong training. Following training, Evans will be able to take the business on the road if her husband is relocated.

Dream Vacations has a “5-Star Ranking” as a member of the International Franchise Association’s (IFA) VetFran initiative. Committed to giving back to the military community, Dream Vacations hosts “Operation Vetrepreneur,” an annual contest which awards five franchises to veterans; gives a 20 percent discount off the franchise fee; and offers additional discounts for hiring former members of the U.S. military or active-duty military spouses as associates.

Dream Vacations has received many national accolades as a franchise opportunity for veterans. It’s military-friendly awards include a number one ranking the past three years in a row by Military Times in its “Best for Vets: Franchises” list, inclusion on G.I. Jobs annual “Hot Franchises for Veterans” the past six years and recognition by MSC Cruises in its first-ever Seaside Salute Award. Additional accolades include being named “Top 10 Military Friendly Franchise” by Forbes, “Top Veteran-Friendly Franchise” by Entrepreneur and U.S. Veterans magazines and inclusion on USA Today’s “50 Top Franchises for Military Veterans.”

Military spouses and others who have a passion for travel and entrepreneurism who are interested in opening a Dream Vacations travel franchise, please visit http://www.DreamVacationsFranchise.com or call 888-249-8235.

About Dream Vacations A CruiseOne Company

Dream Vacations A CruiseOne Company is part of World Travel Holdings, the world’s largest cruise agency and award-winning leisure travel company. As an experiential brand, Dream Vacations is the only travel franchise opportunity to have a name that speaks to the variety of vacation experiences its franchisees sell. With unrivaled buying power, franchisees can provide competitive prices and exclusive offers when selling memorable vacation experiences such as cruises, resort stays and land tours. For more information on Dream Vacations, visit DreamVacationsFranchise.com. Like Dream Vacations on Facebook at Facebook.com/DreamVacationsFranchise, and follow on Twitter at @Dream_Franchise.