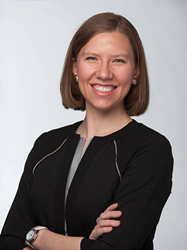 Collins is a military spouse and recently earned a Master of Laws in Taxation (LL.M.), making her a fitting namesake for the scholarship which will support other military spouses’ educational goals, according to leaders of the Kirtland Spouses’ Club.

Collins has supported the Kirtland Spouses’ Club for a number of years by providing pro bono legal work and acting as its general counsel in a variety of matters.

“It’s very rewarding, especially since my husband, Capt. Chris Collins, was an active duty Air Force member for seven years and has also been in the Reserves for the past two years with the Air Force Research Lab,” said Collins. “I know the thrift shop and social activities run by military spouses are incredibly important resources for families at Kirtland AFB.”

“Bobbie has enabled us to more confidently operate the Kirtland Spouses’ Club. As military spouses we know how to address the challenges of the military lifestyle and support other military spouses. As volunteers we are not knowledgeable about the law, and a lack of knowledge is always an opportunity for trouble. We are very grateful for all of Bobbie’s advice to help us avoid any issues,” said Kirtland Spouses’ Club President Frank Capuano.

Collins has taken her support to a national level as well, as a member of the Military Spouse JD Network (MSJDN), a network of military spouse attorneys.

She was also recently appointed as the American Bar Association Young Lawyers Division Liaison to the Committee on Legal Assistance to Military Personnel, effective in September 2017.

“I am truly so honored to be recognized with this scholarship. It was a wonderful surprise and I’m happy that it will help ‘pay it forward’ for other military spouses to continue their education,” said Collins. “I’m also thankful to be at a firm which places such a high value on pro bono work!”

Two of the other partners in the Albuquerque office of Lewis Roca Rothgerber Christie, Dennis Jontz and Jeff Albright, are former military and supported Collins’ pro bono efforts with the Kirtland Spouses’ Club.