Stevie winners will be presented with their awards on June 20, 2017 in New York 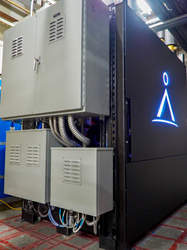 The Gold Stevie awarded to Axiom recognizes its energy innovation of the Refrigeration Battery which leverages the existing cooling systems grocery stores already own, to help reduce their energy use

In an acknowledgement of its advancements in thermal energy storage, Axiom Exergy has won the Gold Stevie® Award for Energy Innovation in The 15th Annual American Business Awards. The award recognized Axiom for its Refrigeration Battery which is currently operating at a Whole Foods Market in Los Altos, California, and scheduled for installation at a Walmart store in San Diego, as well as planned for utilization by Con Edison in its Brooklyn and Queens New York territories.

“It’s an honor to be recognized by the American Business Awards for our work supporting grocery stores and other cold storage facilities,” says Amrit Robbins, CEO of Axiom Exergy. “Given the unique shape of a supermarket’s demand profile, which is relatively flat compared with other commercial buildings, supermarkets are demanding a cost-effective energy storage solution capable of providing long-duration load shifting, as opposed to peak shaving typically provided by electrochemical systems. We are proud to do our part in making strides in both the areas of intelligent load management, as well as cost savings.”

The Refrigeration Battery stores “cooling” at night by freezing tanks of salt water when energy costs are low. Then, when electricity prices peak during the afternoon, the Refrigeration Battery “discharges” to provide uninterrupted cooling services. Axiom offers the Refrigeration Battery to its customers via a savings-as-a-service model, requiring no upfront capital or out of pocket expense for the life of the project. With an expected useful life of 30 years, the Axiom technology is typically offered as an energy service, enabling supermarket owners to reserve precious capital for revenue-generating investments.

Nicknamed the Stevies for the Greek word meaning “crowned,” the awards will be presented to winners at a gala ceremony at the Marriott Marquis Hotel in New York on Tuesday, June 20. Tickets are now on sale.

More than 190 professionals worldwide participated in the judging process to select this year’s Stevie Award winners.

“Each year the judges find the quality and variety of the nominations to be greater than the year before. The 2017 competition was intense and every organization that has won should be proud,” said Michael Gallagher, president and founder of the Stevie Awards.

Details about The American Business Awards and the list of 2017 Stevie winners are available at http://www.StevieAwards.com/ABA.