Book Retailer Says NO to Return to Tiffany's

Return to Tiffany's short stories by Jerome Mark Antil releases on Mother's Day - but not in one chain of bookstore. When Antil asked why, headquarters emailed him, "The buyer didn’t comment. He just wrote, 'pass'. Romance is over published right now." 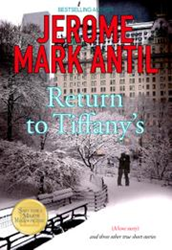 "Romance books are overdone at Barnes & Noble - so they're not buying."

KIRKUS REVIEW
Winsome stories of love and unbreakable bonds, notwithstanding tragedy or years of separation.

Antil’s autobiographical short story collection features tales of family Christmases from his youth and a romance that stands the test of time.

In the opening of the titular love story, Jerry, rather appropriately, is enamored. It’s 1966, and the 20-something is a groomsman for a friend’s Long Island wedding. He catches a glimpse of one of the bridesmaids—Pamela, as it turns out—and is immediately smitten. The nearly 7-foot-tall groomsman is coupled with Pamela, the tallest of the women, for the ceremony, and they even get caught in a photo together with a passing Robert F. Kennedy. But after the wedding, Pamela heads back to Paris, where she works as a model. Ten years pass, and Jerry has the opportunity to spend an evening with Pamela, an unforgettable encounter before the two reunite decades later. Antil’s tale grows more endearing as the couple’s romance becomes more familiar. Jerry, for example, initially idolizes Pamela, whose modeling days were spent mingling with celebrities, but as he gets to know her (favorite movies and books), it’s an unquestionably strong connection between real people.

The remaining trio of tales... revolving around Christmas with his family. The hilarious “Richard Leaves the Choir Breathless” spotlights 6-year-old Jerry’s older brother, Dick, who’s in trouble so often at Roman Catholic school he’s mastered the art of sleeping while standing in the corner. His performance for the school’s Christmas pageant is, not surprisingly, a showstopper. “Postwar Shortages and Shortfalls” is likewise amusing when a holiday gift for the children’s mother leads to a mishap at a bank that may traumatize the family with embarrassment. The book ends with “A Cazenovia Christmas Past,” the gloomiest of the bunch. In it, preteen Jerry and his siblings are shocked when their father is diagnosed with tuberculosis...