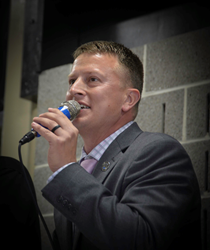 Auctioneering is a team sport

The World Automobile Auctioneer Championship saw a field of over 100 auctioneers and ringman competing for the title of World Champion. The annual contest is held at wholesale automobile auctions around the country and features top auction talent from the United States, Canada and other nations. White is only the second auctioneer in history to win all three major contests.

White is an Ashland, Ohio based auctioneer and co-owner of Ohio’s fastest growing auction company, RES Auction Services. White began his love for auctioneering as a child attending annual livestock auctions at the Country Fair. From that humble beginning White now appears on auction blocks around the United States and at internationally televised Barrett-Jackson Collector Car Auctions.

In addition to modern and classic cars, White also sells luxury real estate in Ohio and around the nation, pure bred livestock, heavy equipment and agricultural equipment and land.

“My wife, Megan and I are blessed with three young boys and it was my goal when I began this journey was to win a championship ring for each of them,” White said in his acceptance speech. "Auctioneering is a team sport and I am so fortunate to be surrounded by the greatest group of professionals our industry has to offer."

About RES Auction Services: An Ohio based team of auctioneers and auction marketing professionals serving clients in Ohio and around the Midwest. Specializing in the sale of Agricultural (Farm) Land, Heavy, Agricultural and Industrial Equipment, Residential and Commercial Real Estate and other high value assets.