As more than 18,000 Liberty University graduates prepared to make their own mark on history, another piece of history was being made on campus on Saturday, as President of the United States Donald J. Trump sent them off with the first Commencement address of his presidency. 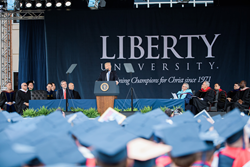 As more than 18,000 Liberty University graduates prepared to make their own mark on history, another piece of history was being made on campus on Saturday, as President of the United States Donald J. Trump sent them off with the first Commencement address of his presidency.

A record crowd of about 50,000 heard Trump’s remarks to the Class of 2017 at Williams Stadium, the second graduating class to welcome a sitting U.S. president for Commencement (President George H.W. Bush addressed the Class of 1990).

The moment shined a spotlight on Liberty — no longer as a university rising to prominence, but as one at the pinnacle of it.

“Notre Dame has had a tradition the last few generations to have the new president deliver his first Commencement address (there),” Liberty President Jerry Falwell said before introducing Trump. “We’ve always respected and admired Notre Dame University. In fact, from our very beginnings, we aspired to be for evangelical young people what Notre Dame is for Catholic young people. Well, I am proud to say today that the president of the United States chose to deliver his first Commencement address not at Notre Dame, but at Liberty University.”

Welcoming President Trump back for his third visit to Liberty, Falwell said he has “noticed a new hope and a new optimism sweeping the country,” since Trump’s election.

“As a country, we needed fresh and bold leadership,” Falwell said. “President Trump’s love for ordinary Americans and his kindness, generosity, and bold leadership qualities made him the best candidate for the job. Mr. Trump possesses the resolve to put his country first and to never give up in a world that is increasingly hostile to our values.”

Trump followed in that vein, making several remarks throughout his speech that encouraged graduates to “relish the opportunity to be an outsider.”

“Embrace the label, because it’s the outsiders that change the world and make a lasting difference,” Trump said.

Trump urged the graduates to follow their dreams, with “courage, guts, and stamina,” to resist the temptation to quit, and to take “the road less traveled.”

Trump recognized two individuals in the crowd whose lives were true examples of persistence and grit, including NFL Hall of Fame quarterback Jim Kelly, who was celebrating his daughter Erin’s graduation. Trump called Kelly a man with “tremendous heart” who “knew how to win,” both on the field and in two battles with cancer. The president also honored decorated World War II veteran George Rogers, who served Liberty faithfully for many years as its CFO. Rogers survived the Bataan Death March and because of his suffering, wasn’t expected to live past the age of 40. Rogers is now 98.

Trump noted how Liberty’s vision has always included a top-level athletics program , and he congratulated the university for recently being approved to join the Football Bowl Subdivision, the highest level of collegiate competition.

“The success of your athletic program — arriving on the big stage — should be a reminder to every new graduate of just what you can achieve when you start small, pursue a big vision, and never, ever quit — you never quit,” Trump said. He surprised the crowd by announcing several of Liberty’s upcoming football opponents, including the University of Virginia, Auburn, Army, Brigham Young, Virginia Tech, Wake Forest, and Ole Miss.

“From the most humble roots, you have become a powerhouse in both education and sports,” Trump said.

Trump also celebrated those who fight on the front lines in the war for freedom — the men and women of America’s armed forces.

“We are profoundly grateful to every single one of you who sacrifice to keep us safe and to protect God’s gift of freedom,” the Commander in Chief said, recognizing the nearly 6,000 of Liberty’s Class of 2017 with military ties. “It is truly a testament to this university and the values that you embrace that your graduating class includes so many patriots who have served our country in uniform.”

Reminding the graduates that they came from a university “where (you) really have true champions,” and predicting that a future U.S. president “or two” are likely among them, President Trump challenged the Class of 2017 to serve and protect others as they embark on their journeys to impact the world.

“Never stop fighting for what you believe in and for the people who care about you,” he said. “Carry yourself with dignity and pride. Demand the best from yourself and be totally unafraid to challenge entrenched interests and failed power structures.”

This week marks the 10-year anniversary of the death of Liberty’s founder, Dr. Jerry Falwell, and President Falwell honored his father’s legacy by sharing the advice he always gave to students.

“My father would find a way to weave into every speech and sermon the admonition that students should never quit and never give up, and my goal is to reiterate that advice today,” he said. “Graduates, you will face seemingly insurmountable hardships and obstacles often throughout your life. At times, everything will seem hopeless and every fiber of your being will be screaming for you to quit and give up on your dreams. But persevering in those darkest hours is what separates the winners from the losers. Only if you press on will you achieve greatness.”

Trump also celebrated the legacy of Dr. Jerry Falwell, noting that it was his vision that made Liberty what it is today. He noted that the elder Falwell would be “very proud” of his son for carrying that vision forward.

ABOUT LIBERTY UNIVERSITY
Liberty University, founded in 1971, is the largest private, nonprofit university in the nation, the largest university in Virginia, and the largest Christian university in the world. Located near the Blue Ridge Mountains on more than 7,000 acres in Lynchburg, Va., Liberty offers more than 550 unique programs of study from the associate to the doctoral level. More than 250 programs are offered online. Liberty’s mission is to train Champions for Christ with the values, knowledge, and skills essential for impacting tomorrow’s world.