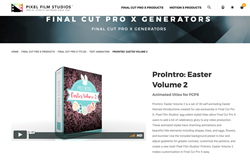 This is a set of FCPX Intros designed for Easter.

ProIntro Easter Volume 2 includes 30 self-animating presets that are made with compatibility in mind. Each design features fundamental title elements that generate a distinct feel from one another. Users can further customize the presets by manipulating certain color wheels and control sliders to create a look all their own.

ProIntro Easter Volume 2 presets are extremely simple to use and extremely practical. Easily adjust position, rotation, and scale of titles using intuitive on-screen controls within Final Cut Pro X. Utilize sliders that are located in the top-right inspector window to manipulate the spread of title elements. Finally, stylize the text by simply toggling on the “Editable” checkbox.

ProIntro Easter Volume 2 included a background preset that allows users to tint the media below ProIntro presets using a simplistic color wheel. Additionally, blur controls are provided to allow editors to achieve greater contrast between title elements and the scene below. In addition to the generic background preset, an Easter themed customizable background has also been provided.

ProIntroEaster Volume 2 has been made exclusively for use in Final Cut Pro X. Simplistically manipulate these egg-citing, self-animating titles using on-screen controls and slider controls found within the FCPX inspector window. Apply ProIntro: Easter Volume 2 with drag and drop ease to add a “hoppy” feeling to any video production.