Riverdancers beware: if you fall in, 41% of pet-owning Brits would prioritise pet rescue over person safety

Research conducted by YouGov on behalf of Aquarium Software reveals that when faced between saving a stranger or a pet if they were both to fall in a river, two fifths of us (41%) would save our pet first. 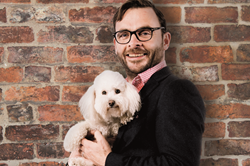 A new study commissioned by Aquarium Software suggests it is the stranger who is more likely to be in danger among British pet owners. The research conducted by YouGov on behalf of the Anglo-American technologist reveals that when faced between saving a stranger or a pet if they were both to fall in a river, two fifths of people (41%) would save the pet first. Aquarium believes the findings reinforce the incredibly strong bond between Brits and their furry friends. Clearly, people see pets as an integral part of the family; when it comes down to a choice of saving the family Scottie or a stranger first, the research shows it’s a dog’s life in many cases.

“Aquarium is all about helping the pet insurance industry serve pet owners better, and understanding the emotional bonds and motivations of pet parents is essential in that process,” said Mark Colonnese, VP Sales and Marketing at Aquarium Software. “The news regularly features stories of owners putting their lives at risk to save a pet and this research shows just how far many of us would prioritise our pets ahead of people.”

UK Men with pets were more likely to save a stranger first (44 per cent), compared with 32 per cent of women and while the North West is the safest for strangers needing a river rescue, with 44 per cent saving the stranger first, weak swimmers should avoid the East Midlands: in the pet rescue capital of Britain, 51 per cent would save their floundering furry friend first, with only 34 per cent saying they would rescue the stranger first.

“Given pet parents’ propensity for pet rescue, insurers need to seriously consider why more than two fifths (42 per cent) of all owners have never had pet insurance,” added Colonnese. “Advances in technology and Big Data are delivering affordable policies, yet while owners will dive into a river to save their pets ahead of someone they don’t know, they seem reluctant to dip into their pockets to protect the family pet without getting wet.” The cost of an average pet insurance claim is over £700, which is nearly three times the average premium. Colonnese believes a critical point has now been reached for the industry.

“We are far from reaching a high water mark for pet insurance, despite premium volumes up 17 per cent and counting in the last two years,” he explained. “Those who left the market underestimated the huge potential for long term engagement with pet parents. A lifelong customer journey with policyholders is up for grabs and represents an unrivalled marketing opportunity. Lessons have been learned from sector leavers and next generation technology is not just helping insurers keep their heads above water, it is delivering a viable, profitable business model.”