Dustin “Foxy” Clark’s New Book “Nigh Nirvana” is a Creatively Crafted and Vividly Illustrated Journey into the Imagination.

Recent release “Nigh Nirvana” from Page Publishing author Dustin “Foxy” Clark is a profound work of science fiction that delves into a world of war, fate and reality. 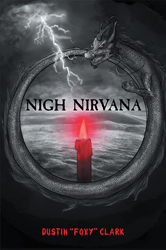 Dustin Clark, an educated researcher and writer, martial artist, musician, occult magician, artist and author, has completed his new book “Nigh Nirvana”: an enlightening and suspenseful work that examines the realm of dreams versus reality.

Each chapter follows the symbolism of the Tarot cards and the aura of this realm turns from the folly of the fool to the weight of the world in twenty two chapters. Heaven comes crashing down, and hell rises up with our narcoleptic protagonist awakening from a month-long coma. Plagued by dreams that strike real and inside this foggy limbo, he returns to his life with a terrible gift. It is set in the not so distant future after a great war afflicts the nation, leaving a feudal system where terrorism is just the daily news where one must ask who will survive.

Possum, as he is called, narrates his journey through a shadowy world wherein fear is their part of town, martial law is the status quo, and implanted RFID chips have replaced the currency. His small group of close friends he considers family enters into a city known only as New Babylon to find their own fates and fight for themselves tooth and nail. There, a rumored group of super soldiers known only as “They who see in the dark” turns out to be a savage reality, and they brave new enemy. Guided by dreamscape visions, he finds out that the nightmares he has are more than what they seem before the end begins. With the sounds of horsemen hooves echoing, there is a question therein, who can truly see inside the darkness?

Readers who wish to experience this chilling work can purchase“Nigh Nirvana” at bookstores everywhere, or online at the Apple iTunes store, Amazon, Google Play or Barnes and Noble.