This Saturday, May 20, 2017, the sixth international March Against Monsanto will take place with the goal of raising awareness about Monsanto's genetically modified seeds and cancer-causing weedkiller Roundup. Monsanto’s Roundup herbicide has been detected in air and rain samples, the breast milk of nursing mothers, childhood vaccines, prenatal vitamins, and baby formula, as well as 90% of the conventional food supply. 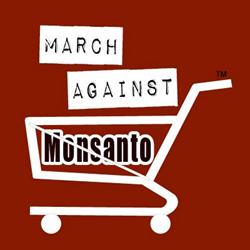 Hundreds of thousands of concerned citizens will hit the streets May 20th, 2017 for the 6th international March Against Monsanto grassroots campaign. The global events will take place in hundreds of cities on six continents with the objective to further educate and raise awareness about Monsanto’s genetically modified seeds and the increasingly toxic food supply. A focal point of this year’s events will be on Monsanto’s Roundup herbicide, which has been detected in air and rain samples, the breast milk of nursing mothers, childhood vaccines, prenatal vitamins, and baby formula.

Recently, Congressman Ted Lieu of California issued a statement urging people to “immediately stop using Roundup” and it has been revealed that the EPA and Monsanto colluded for decades to conceal the extreme toxicity of the glyphosate-based herbicide. In 2015, the World Health Organization determined that glyphosate “probably” causes cancer, an incredibly alarming fact considering the U.S. Geological Survey data shows that the use of glyphosate has increased 16-fold since the mid-1990’s when GMO crops were first introduced. This also calls into question Monsanto’s claims that genetically modified crops will decrease the need for harmful herbicides.

Fueling this year’s campaign is the discovery that glyphosate has been confirmed as a contaminant in childhood vaccines, which in some states, are mandated for children. There are zero studies in existence to prove the safety of injecting glyphosate into humans, let alone a baby on its first day of life.

“Monsanto’s glyphosate has contaminated every facet of our lives. The cancer-causing herbicide has been detected in the air we breathe and many of the organic foods we eat. Our children are directly targeted as is evidenced by the discovery of glyphosate in vaccines, breast milk, and baby formulas. We must rise up and stop this toxic nightmare or we will see generations of overwhelming sickness and premature death like never before,” said Tami Canal, the founder of March Against Monsanto.

March Against Monsanto rallies will occur May 20th with the first protests happening in New Zealand and Australia to kick off the global events. Extensive protesting will happen across the world and related online coverage can be found on social media platforms including Twitter, Facebook, and Instagram by using the hashtags #marchMay20 and #MarchAgainstMonsanto (#MAM).

The March Against Monsanto event in Washington D.C. will partner with Operation Stand Together, an initiative demanding justice for disabled, chemically-exposed military personnel. Erin Brockovich and speakers from March Against Monsanto will expose Monsanto’s production of war chemicals including Agent Orange and modern day white phosphorous.