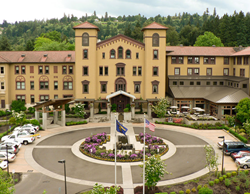 Ziegler and the Sisters collaborated in 1999 on the original retirement community development, and it has been very gratifying to see the great success of Mary’s Woods...It’s an honor to be part of making this long-planned second phase a reality.

“Ziegler and the Sisters collaborated in 1999 on the original retirement community development, and it has been very gratifying to see the great success of Mary’s Woods. The very fast pre-sales of this expansion are evidence of the market affinity for Mary’s Woods and testament to its strong leadership team. It’s an honor to be part of making this long-planned second phase a reality,” commented Mary Muñoz, Managing Director in Ziegler’s senior living practice. Diane Hood, CEO of Mary’s Woods, stated “Mary’s Woods is an integral part of the mission of the Sisters of the Holy Names of Jesus and Mary. Its success is attributable in no small part to the team of experts which has come together to design, finance, develop and build a safe space for Sisters and the greater community to live a meaningful life. Ziegler is one of the valued partners who has helped us achieve our vision, and we are excited about this transaction, which represents the next step in the evolution of Mary’s Woods.”