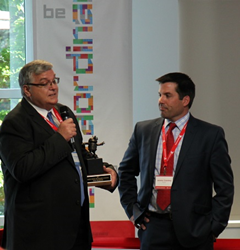 The Utah Innovator in Education award highlights Principal Broderick's great achievements over the past two decades--especially as an advocate of technology in the classroom.

“Principal Broderick is a champion of both education and helping kids in Utah,” said Jeremy Cowdrey, Executive VP of Sales and Marketing for Imagine Learning. “He exemplifies the kind of leader who really looks out for the general welfare of his students as well as their educational needs. The Utah Innovator in Education Award highlights his great achievements over the past two decades—especially as an advocate of technology in the classroom.”

With this event, Imagine Learning also celebrates thirteen years of teaching language, literacy, and mathematics to the children of the world. Additionally, with its recent move to new headquarters, Imagine Learning celebrates its continued economic commitment to the wider Utah community.

“Thirteen years ago, Imagine Learning was started by six people who wanted to make a difference for kids,” said Joe Swenson, CEO of Imagine Learning. “Today, there are nearly 500 members of the Imagine Learning family—each one passionate about helping kids succeed in math, language, and literacy. As open house visitors toured our new building and tried out our products, we saw them get excited as they caught the vision of what we do here. We appreciate the hundreds of employees, family members, and leaders in our community who helped us celebrate this landmark event for Imagine Learning.”