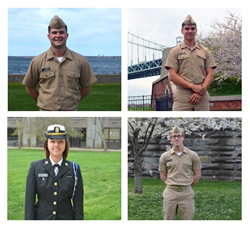 Crowley Maritime Corp. awarded four State University of New York (SUNY) Maritime College cadets with Thomas B. Crowley Memorial Scholarships to help further their educational opportunities. Recipients Jacob Ennerfelt, John Szczecinski, Gabrielle McCracken and Kent Napoliello, who will each sail with Crowley this summer, were chosen based on their demonstrated leadership skills, financial need and plans to pursue a career in the marine engineering or shipping industries after graduation.

Ennerfelt, from Salisbury, Md., is a third-class cadet majoring in mechanical engineering and pursuing an engine license. His scholastic achievements have earned him a position on the Admiral’s List, the highest honor for undergraduate students. Ennerfelt said funds from the Thomas B. Crowley Memorial Scholarship will allow him to advance his educational career through unique learning opportunities in the maritime industry. He also has a degree in physics and pre-engineering from Salisbury University.

Szczecinski, a third-class cadet originally from Newark, Del., is studying marine operations and pursuing an engine license. He is a three-time Admiral’s List honor roll student, plays on the football and basketball teams, and is in the boxing club. He is the youngest of four siblings to graduate from Delaware Military Academy and is confident the scholarship will provide outstanding opportunities to better his career as an engineer. After graduation, he hopes to travel the world.

Third-class cadet McCracken, from Sayreville, N.J., is majoring in marine environmental science with a minor in meteorology and oceanography, while also pursuing a deck license. During her time at SUNY, she has served as vice president of Maritime Activities and Programs (MAP), a club that plans events and trips on and off campus. McCracken is also a member of the Big Sister Program, the Environmental Club, the Culture Club, the Newman Club, the Sisters Taking Action for Recruitment (STAR), and the Marine Environmental Science (MES) Student Advisory Board.

Napoliello, a second-class cadet from Bay Head, N.J., is studying marine transportation and pursuing a deck license. He is a member of the football and crew teams, the uniform committee, and the Small Vessel Operations Club. While at SUNY, Napoliello has also supported fellow students in the classroom assisting professors of Terrestrial Navigation courses, where cadets learn about nautical charts and plotting, buoys, tides and currents. As he prepares for his junior year, Napoliello is sure this scholarship will provide "once in a lifetime" experiences and knowledge to make him the best and most professional merchant mariner possible.

Since 1984, Crowley has provided more than $3 million dollars in scholarship funding for more than 1,000 students. The company has also donated more than $2 million over the years to support other educational programs. In 1994, Chairman and CEO Tom Crowley Jr. established the Thomas B. Crowley Sr. Memorial Scholarship Program in honor of his father who led the company to extraordinary heights before passing away in 1994. The company continues to give scholarship dollars to deserving students in the U.S., Alaska and Puerto Rico. In 2006, the program was expanded to Central America, and to date has provided financial assistance to more than 20 students in that region. To learn more about the Crowley scholarship program, visit http://www.crowley.com/scholarships.