Balboa Press Book is a winner of an Independent Press Award

“Don’t Settle: How to Marry the Man You Were Meant For” also recognized in Independent Book Publishers Association competition last month. 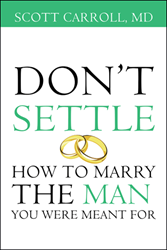 Balboa Press is pleased to announce that “Don’t Settle: How to Marry the Man You Were Meant For” was named a winner in the Marriage category for an Independent Press Award weeks after winning Silver at the Independent Book Publishers Association in its prestigious Benjamin Franklin Book Awards.

The book authored by Scott Carroll tells readers how to marry science with spirituality and use neuroscience, genetics, behavioral science and psychology to attract the perfect man for you and get him to the altar in as little as a year.

The Independent Press Award recognizes hundreds of books and publishers with its 2017 IPA winners and Distinguished Favorites in categories that range from Adventure to Young Adult Fiction. 2017 independent publisher winners include the American Psychological Association, Blackstone, Galaxy Press and Select Books

Selected award winners and Distinguished Favorites are based on overall presentation and excellence. The 2017 Independent Press Award competition included international submissions from countries such as Australia, Canada, China, Germany, India, Portugal, the United Kingdom and the United States.

“Awards are another way to increase a book’s marketability and credibility. We expect winners and Distinguished Favorites in our annual Independent Press Award to receive a heightened level of attention with hopes of translating into book sales, licenses and additional content distribution,” said awards sponsor Gabrielle Olczak.

About Balboa Press
Balboa Press is a division of Hay House, Inc., a leading provider in publishing products that specialize in self-help and the mind, body and spirit genres. Through an alliance with indie book publishing leader Author Solutions, LLC, authors benefit from the leadership of Hay House Publishing and the speed-to-market advantages of the self-publishing model. For more information, visit balboapress.com. To start publishing your book with Balboa Press, call 877-407-4847 today. For the latest, follow @balboapress on Twitter and “Like” us at facebook.com/BalboaPress.