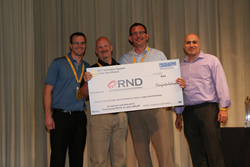 This award cements RND's reputation as one of the most capable and respected custom automation and robotics vendors.

RND Automation & Engineering (http://www.rndautomation.com), a leading manufacturer of custom automation machinery, robotic and vision workcells, garnered the top honor for System of the Year at FANUC Robotic's Annual Authorized System Integrator (ASI) conference in San Diego. After RND was selected by Fanuc as one of the top four contenders, President Sean Dotson presented the system in front of over 500 peers and the ASIs selected RND’s Thermal Insulator Assembly and Packaging Cell as the most innovative and creative system for 2017. This award cements RND's reputation as one of the most capable and respected custom automation and robotics vendors.

Dotson and RND Director of Projects Aaron Laine were on hand to accept the award. “There are so many strong automation integrators out there supplying innovative solutions to industry and we are thrilled to have been selected for this honor by these peer organizations”, remarked Dotson. “RND has long been known in the Southeast as a go-to supplier for custom automation and this award helps us establish a more national presence.”

RND helps companies in a wide range of industries reduce cost and downtime, while increasing quality and production by automating their production and packaging processes. The company also supplies the packaging industry with the Kanga, a Vertical Form Fill Seal Pouching Machine. The Kanga has the smallest footprint in its class and is designed for customers with high product mix, lower volume production runs that need rapid change-over to accommodate various pouch sizes.